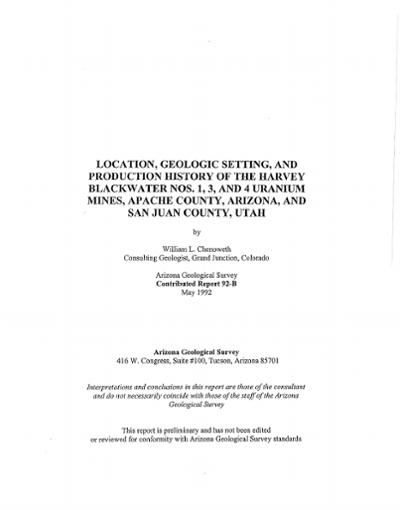 During the uranium boom of the early 1950's, Harvey Blackwater, a Navajo Indian from Mexican Water, Arizona, held five claims near the Monument No. 2 mine in northwestern Apache County, Arizona (Figure 1). In 1991, while preparing a report on uranium mining in Monument Valley, Utah, for the Utah Department of Natural Resources (Chenoweth, 1991), I discovered some confusion about the locations of Blackwater's mines. Published reports (Johnson and Thordarson, 1966; Chenoweth and Malan, 1973) didn't agree on locations or names, even though the information in the latter report was taken from a U.S. Atomic Energy Commission (AEC) mine-location map (Young and others, 1964). Scarborough (1981, Figure 16) showed three Harvey Blackwater deposits but did not number them.