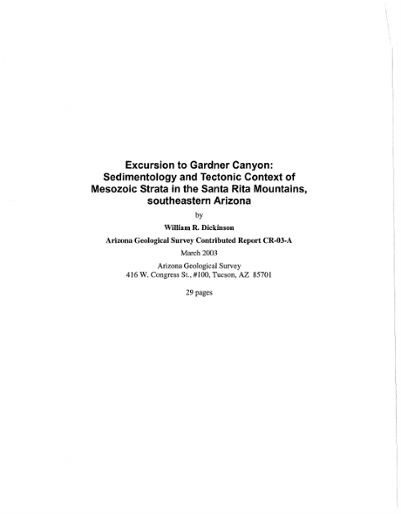 In southeastern Arizona, many mountain ranges south of 1-10 harbor variably modified Jurassic and Laramide calderas. A dozen major calderas have been identified (see below after Lipman and Sawyer, 1985; Riggs, 1987; Lipman and Fridrich, 1990; Riggs and 0 Haxel, 1990; Riggs and Busby-Spera, 1991; Lipman and Hagstrum, 1992; Lipman, 1993; Moore, 1993; Ferguson et aI., 2000, 2001; Richard et al., 2000)0 The fills, walls, and floors of the calderas occupy a significant percentage of pre-Cenozoic bedrock exposures outside Cenozoic volcanic fields and alluviated basins. Essentially all the calderas have had some morphological features removed by deep erosion, have been tilted by later structural deformation, and are locally disrupted by younger faults. Recognition of the calderas is nevertheless vital for understanding the geologic framework of southeastern Arizona. Without appreciation of their presence, structural and sedimentological interpretations become garbled. All the ranges were initially mapped by field geologists who lacked the volcanological insights required to appreciate the presence of calderas, and essentially all pre-1985 geologic maps are inadequate. The earlier compilation of Drewes (1980), for example, shows no Mesozoic calderas in any guise. Recognition of the calderas had to await the capability to distinguish routinely between welded tuffs and lava flows, between thick ignimbrite masses ponded within calderas and more widespread outflow tuff sheets, between intracaldera tuffs and hypabyssal intrusions, between intracaldera landslide megabreccias and other disrupted rock masses, between the onlapping depositional contacts beneath ash-flow tuff bodies that are emergent from caldera rims and more widespread unconformable contacts, between caldera-bounding structures and other kinds offaults, between caldera-rim concentric or radial dikes and other kinds of dike swarms, and between resurgent domes or intrusions of caldera interiors and plutons unrelated to calderas.