Map and Geologic Sections of the Underground Workings of the Monument No. 1 and Mitten No. 2 Uranium-Vanadium Mines, Navajo County, Arizona 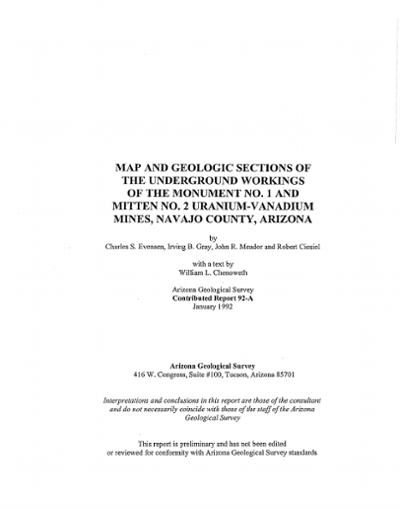 In the mid-1950's, Charles S. Evensen, Irving B. Gray, John R. Meador, and Robert Ciesiel were geologists for the Atomic Energy Commission (AEC) in Grand Junction, Colorado and worked in Monument Valley in Utah and Arizona (Figure 1). Evensen was the Area Geologist for the AEC in Monument Valley. During March and April 1955, these four geologists mapped the Monument No.1 and Mitten No.2 uranium-vanadium mines (Figures 2, 3, and 4). Gray and Ciesiellater mapped the Black Rock, Sally, and Harve Black No.2 uranium mines in Navajo County, Arizona, as well as three mines in San Juan County, Utah on Holiday and Oljeto Mesas. These mines are described elsewhere (Ciesiel and Gray, 1989; Chenoweth, 1991; Gray and Ciesiel, 1991). In 1983 the uranium resource and liaison programs of the U.S. Department of Energy (DOE) were transferred from Grand Junction to Washington D.C. The geologic data that the AEC, Energy Research and Development Administration (ERDA), and DOE had collected from 1947 to 1983, however, were relocated to the U.S. Geological Survey (USGS) in Denver. The text of this report is primarily based on information that was obtained when William L. Chenoweth was employed by the AEC. He examined the mines in early 1955, when the mapping project was just getting started. Data on ore production, leasing, and permitting, however, were obtained from the AEC files in Denver, as were copies of the map and geologic sections (Figures 2, 3, 4, and 5).