Heavy Metals in Surface Soils and Streambed Sediments in the Wallapai Mining District, Northwestern Arizona, A Historic Mining District in a Semiarid Region 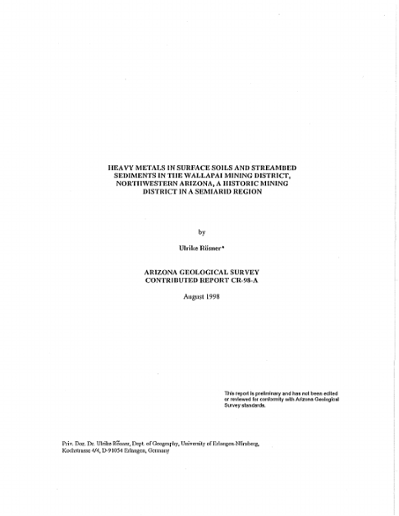 Beginning in the mid-1860s the southwestern US experienced a mining boom, and a large number of mines were developed. They went through alternating phases of economic upswing and decline, but by the end of the 1940s most of the smaller mines had been abandoned for good (Woznicki 1987, Beck and Haase 1989). Nevertheless, their tailing, waste rock dumps and acid mine drainage still represent an environmental hazard because of the heavy metals released from them (Young and Clark 1978, Marcus 1987, Rampe and Runnels 1989, Rosner 1995a, 1996, 1998, Graf et al. 1991, Hyde 1994, Lind and Hem 1993). The metals can either be leached directly into the groundwater and the surface water (Young and Clark 1978, Lind and Hem 1993) or accumulate in soils and sediments (Brummer et al. 1986, Bradley 1989, Moore and Luoma 1990, Schachtschabel et al. 1992). Under certain circumstances they can be redissolved and become available to plants or enter the groundwater with the percolation water (Young and Clark 1978, Bergmann 1989, Herms 1989, Sauerbeck 1989). This article will deal only with heavy metals in fluvial sediments and in soils; the contamination of water and vegetation in the study area (cf. below) was dealt with in recent publications (Rosner 1995b, 1996, 1998).