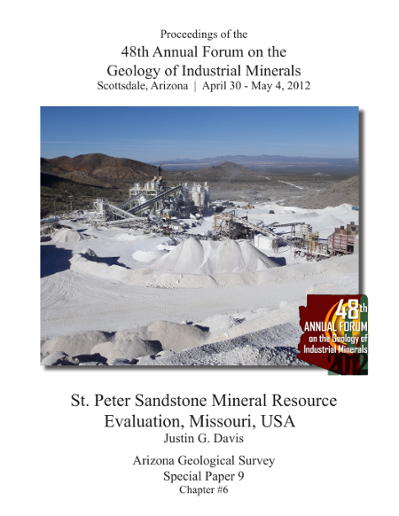 The St. Peter Sandstone is typically a well-sorted, friable, ultra-pure, fine- to medium-grained, quartzose sandstone with silica content higher than 99 weight percent in places. The sand grains are well-rounded, highly spherical and characteristically frosted. Their size typically varies from 2 millimeters diameter (No. 10 U.S. Standard Sieve Series size) to less than 0.08 millimeters diameter (No. 200 U.S. Standard Sieve Series size). A freshly exposed surface of the formation is commonly white with shades of pink and green. Weathered surfaces are a dirty gray or brown and are case-hardened at many localities. Bedding is characteristically indistinct, and the formation usually appears massive throughout. The rock is cross-bedded and ripple-marked locally. The formation is generally porous, permeable and rarely fossiliferous in Missouri. The St. Peter is continuously present in the subsurface in the northern half of the state and along the southeastern edge of the state. The St. Peter crops out in a narrow band that starts in western Montgomery County and runs southeastward, along the Missouri River, to just west of St. Louis and continues south, just west of the Mississippi River, through Scott County. The outcrop belt varies from less than one mile wide to over ten miles wide, and it is over 150 miles in length. The formation dips into the subsurface radially away from the outcrop band. A notable isolated outcrop occurs in Lincoln County to the north of the main outcrop band. The St. Peter is discontinuously present in the subsurface along a band in the west-central portion of the state. It is not present at the surface or in subsurface in the remainder of the state. The formation averages 80–100 feet thick. There is an estimated 3.8 trillion short tons of St. Peter in Missouri. Sieve analyses on drill cuttings indicate three subsurface locations in northeastern Missouri where the St. Peter is greater than 10 percent by weight of sand falling in the 20–40 U.S. Standard Sieve Series size range. The St. Peter was first produced in Missouri in the 1870s for the manufacture of glass. Since that time it has been used as a paint additive, filler material, polishing compound, filtering media, and recently it is commonly used as a fracture proppant in oil and gas wells. The St. Peter is currently quarried and produced in Missouri from four sites located in St. Louis, Jefferson and Perry counties. In the same area there are at least nine abandoned historic mine sites.