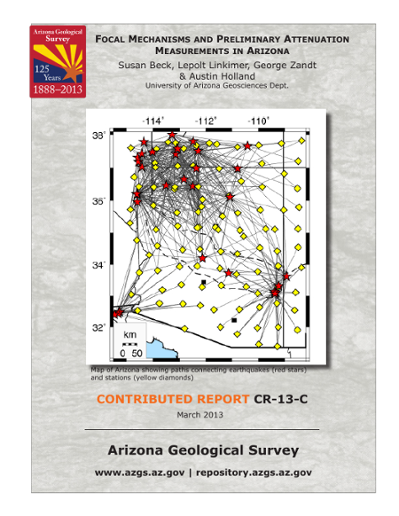 This report was prepared as part of a collaboration between the University of Arizona and the Arizona Geological Survey during the initial development of the Arizona Broadband Seismic Network. Although the work is considered “preliminary”, it is the only such work of its kind as attenuation studies for Arizona were non-existent prior to the report’s completion. The tectonics of Arizona is dominated by the extension in the southern Basin and Range province, and the transition to the less deformed Colorado Plateau. However, earthquakes in Arizona tend to be small with most occurring in the northwest part of the state in the western part of the Colorado Plateau and transition zone. Many of these earthquakes (magnitudes usually < 4) occur north or south of Grand Canyon indicating that the western portion of the Colorado Plateau is deforming and not as “stable” as often described (Kreemer et al., 2010; Brambaugh, 2008). The southern Basin and Range in Arizona has had few earthquakes over the last century and appears to be less active than the Nevada or Utah portion of the Basin and Range. However, in 1887 there was a magnitude 7 earthquake, just south of the Arizona border in Mexico that was widely felt in southern Arizona (Bull and Pearthree, 1988). The 1887 Great Sonoran Earthquake produced a sizeable normal fault scarp with up to 4 meters of offset indicating the southern Basin and Range is capable of significant earthquakes despite the relative low number of earthquakes presently occurring (Sumner, 1977; see http://www.geo.arizona.edu/gsat/1887eq/bibliography.html for additional references). The western part of Arizona is close to Baja and southern California with high rates of seismicity associated with the San Andreas transform system, hence cities such as Yuma, could be at risk if a major earthquake occurred on in southern California. Due to the overall low rates of seismicity there have been few permanent broadband seismic stations in Arizona until recently and hence, very few studies of earthquakes or seismic attenuation in Arizona. The NSF funded EarthScope project recently deployed seismic stations in Arizona for 18 months and the 8 stations that were adopted by the Arizona State Geological Survey has provided a wealth of data to better characterize the earthquakes, present day deformation in Arizona, and make preliminary attenuation measurements for the state (Fig. 1). In order to characterize the present-day deformation we have determined 21 first motion focal mechanisms for small earthquakes in Arizona. In addition, we have determined coda Q measurements of attenuation in much of Arizona.