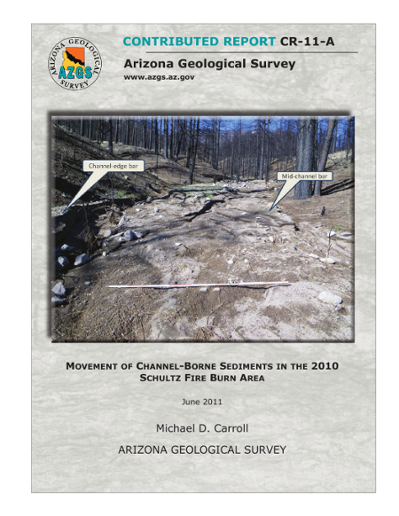 The 2010 Schultz Fire burned 6,091 hectares (15,051 acres) of Ponderosa Pine and mixed conifer forest, four kilometers (two and a half miles) north of Flagstaff, Arizona between June 20 and 30, 2010. Sixty-seven percent of the affected area burned at moderate to high intensity, destroying much of the vegetation and organic duff layer that previously covered the forest floor. The intensity of the fire, granular soils, and steep slopes made the burn area highly susceptible to the generation of debris flows and hyperconcentrated flows by runoff from intense summer monsoon storms common in the area. The first storm to generate such flows from the burn area occurred on July 16, with the largest occurring on July 20, exactly one month after ignition of the fire. On July 20, a 10-yr Average Recurrence Interval (ARI) storm dropped up to 92 mm (3.6 in) of rain on the area. The resulting flows damaged houses and infrastructure in the communities immediately downstream of the burn area. This thesis presents the results of a study undertaken to gain an understanding of the type and amount of sediments located in the burn area channels, and available for mobilization and transport by future storm flows. The U. S. D. A. Forest Service, Burned Area Emergency Response (BAER) team divided the burn area into 11 sub-watersheds. This study focused on watershed 7, the Rope-Arabian-Campbell watershed (named for directly-affected streets at the iii wildland-urban interface), because of the intensity of the July 20 flows and the likelihood of runoff and flows from it having direct impacts on downstream communities during future storm events. Field investigations took place in the fall and early winter of 2010, after the summer monsoon storms and before heavy winter snow. A 15” latitude and longitude grid was overlain on a map of the area and channel cross sections were developed at each channel-grid intersection. This resulted in 42 study sites, with additional investigation throughout the subject watershed. Channel cross section development included measuring; the channel bed profile, post-fire sediment thickness, channel slope, and conducting grain size analysis on post-fire sediments using either, sieve analysis or pebble counts as necessary based on maximum particle size. Include 2 11"x17" maps showing distribution of remobilized sediment in study area.