Uranium procurement and geologic investigations of the Manhattan Project in Arizona 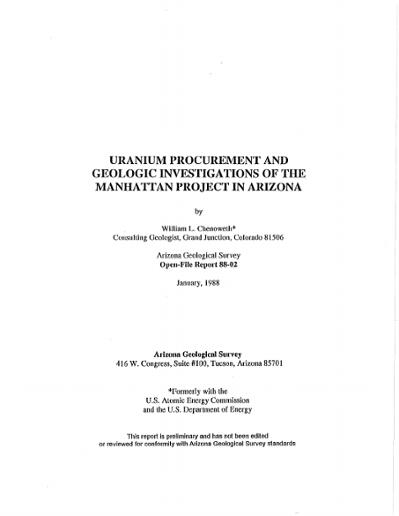 Forty-three years ago, after the detonation of three atomic bombs in 1945, the public became aware of atomic energy and the Manhattan Project. The Manhattan Project was the code name used by the Army Corps of Engineers for the development of atomic weapons and the procurement of the necessary raw materials, during World War II. The project was carried out under the direction of the Corps' Manhattan Engineer District (MED). The MED was established in August 1942. The name was taken from District Engineer, Colonel John C. Marshall's office, in New York City (Hewlett and Anderson, 1962, p. 81). In the summer of 1943 the headquarters of MED was transferred to Oak Ridge, Tennessee, and Lieutenant Colonel Kenneth D. Nichols was made District Engineer (Hewlett and Anderson, 1962, p. 117). Brigadier General Leslie R. Groves in Washington, D.C., was responsible for the entire project. The names of places such as Los Alamos and Mockingbird Gap, New Mexico, that were associated with the project, became well known. The domestic raw materials activities of the project were largely overlooked. This brief historical review summarizes those activities in Arizona. ( 23 pages)