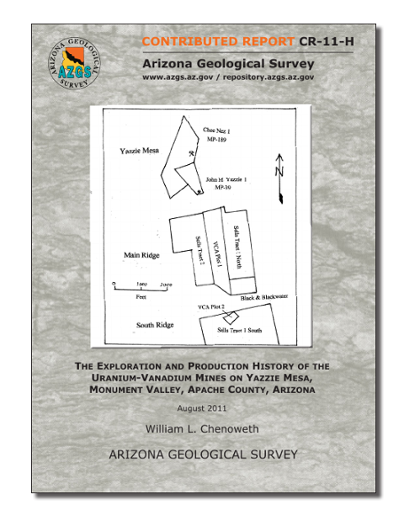 Yazzie Mesa is a small mesa north of Vanadium Corporation of America's (YCA) 1943 Monument No.2 lease in northwestern Apache County, Arizona. This lease was originally mined for vanadium, but beginning in 1947 was mined for both uranium and vanadium. In 1950, two local Navajos, John M. Yazzie and Chester Tso obtained Navajo Tribal Mining Permits (MPs) on Yazzie Mesa on the northern trend of the Monument No.2 ore deposit. Mr. Tso's MP was never developed and it was dropped. Chee Nez later acquired that area. The report documents the production history of the Yazzie and Nez mines. Yazzie Mesa, a name accepted by the U.S. Board of Geographic names, is shown on the Rooster Rock topographic quadrangle (USGS, 1988) north of the Monument No. 2 open at the center of the right-hand margin of the quadrangle. The Monument No.2 mine area is located in the extreme northwestern area of Apache County, Arizona (Figure 1). The mine is in the Cane Valley on the eastern flank of the Monument Uplift. Access to the mine area was via a 19-mile dirt road that headed south from U.S. Highway 163 one mile south of the bridge over the San Juan River at Mexican Hat, Utah. Another access road went from the mine, over Comb Ridge, and connected to U.S. Highway 160 near Mexican Water, Arizona.