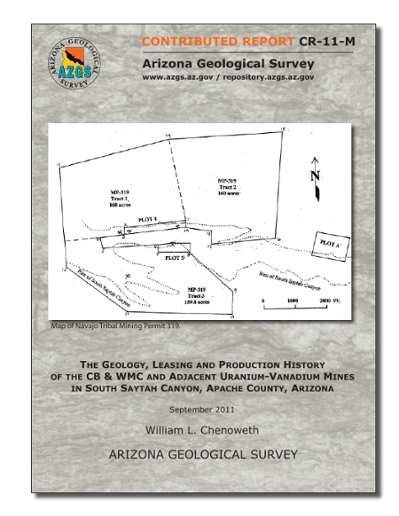 The CB&W-MC mine was developed on an outcrop of uranium-vanadium minerals that were exposed on a rim of the Salt Wash Member of the Jurassic Morrison Formation. The exposure was on the south rim of South Saytah Canyon in the northwestern Carrizo Mountains, Apache County, Arizona (Figure 1). The mine operated in 1943-1944 when the federal government was acquiring vanadium for a strategic stockpile. During the uranium boom of the 1950s, five smaller deposits, the Melvin Benally Nos. 1, 3, South Saytah and School Boy were mined in South Saytah Canyon. This report is part of an ongoing study of the history of uranium-vanadium mining on the Navajo Indian Reservation, Arizona and New Mexico. LOCATION South Saytah Canyon is on the northwestern flank of the Carrizo Mountains, south of Black Rock Point (Figure 1). This canyon and North Saytah Canyon are the headwater for Saytah (Tistah) Wash, a major drainage in the northwestern Carrizo Mountains. When the mines were operating they could be reached by traveling west on U.S. Highway 160, some seven miles from Teec Nos Pos, Arizona, and then traveling to the southwest on an unpaved dirt road that leads to Sweetwater Trading Post. After passing through the canyon where Saytah Wash cuts through the Toh Atin anticline, some nine miles from U.S. 160, take an unimproved dirt road to the left. This road leads into South Saytah Canyon. The CB&W-MC mine is three miles down this road on the right (south) rim of the canyon. The mine is not shown on the Toh Chin Lini Mesa quadrangle [U.S. Geological Survey, 1982] but is at longitude 109°15'40" W, latitude 36°49'35" N.