The Geology, Leasing, and Production History of the Rattlesnake No.8 and Adjacent Uranium-Vanadium Mines, Apache County, Arizona 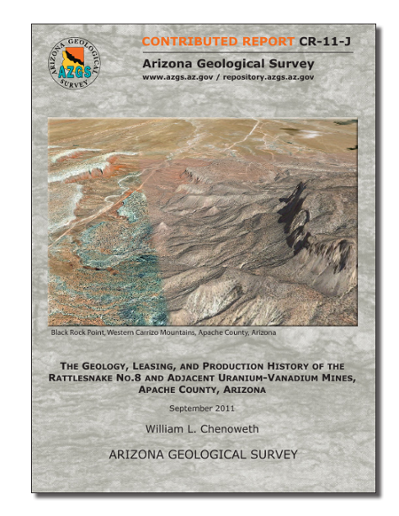 The Rattlesnake No.8 mine was developed on an outcrop of uranium-vanadium minerals that were exposed on a rim of the Salt Wash Member of the Jurassic Morrison Formation. The exposure was on the east side of Saytah (Tistah) Wash in the northwestern Carrizo Mountains, Apache County, Arizona (Figure 1). The mine operated in the early 1940's when the federal government was acquiring vanadium for a strategic stockpile. During the uranium boom of the 1950's, two small deposits, Carson and Grover Cleveland No.1, were located and mined adjacent to the Rattlesnake No. 8 mine. Included with the report are maps of the three mines. LOCATION The Rattlesnake No. 8 mine and adjacent mines are located on the east rim of the canyon of Saytah Wash where that drainage cuts through the Toh Atin anticline in northeastern Apache County, Arizona. The area west of the canyon is known as Martin Mesa (Figure 1). The mines can be reached by traveling west on u.S. Highway 160 some seven miles from Teec Nos Pos, Arizona and then traveling five miles to the southwest on an unimproved dirt road. The area of the mines is covered by theToh Chin Lini Mesa quadrangle [U.S. Geological Survey, 1982b] and the Toh Atin Mesa East quadrangle, [U.S. Geological Survey, 1982a].