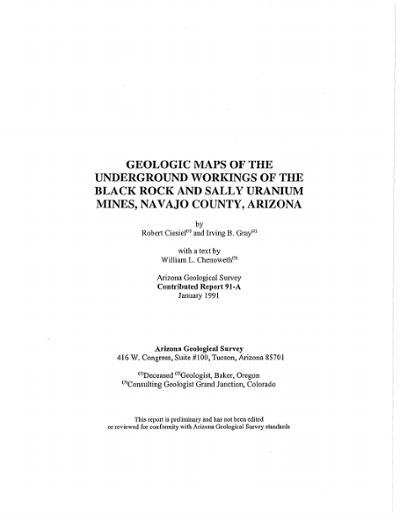 Geologic maps of the underground workings of the Black Rock and Sally uranium mines were recently located in the files of the U.S. Geological Survey (USGS) at the Denver Federal Center. Warren I. Finch of the USGS permitted W.L. Chenoweth to borrow the maps so that copies could be made by the Arizona Geological Survey. These maps are part of the collection of geologic data moved to the Denver Federal Center by the Department of Energy (DOE). In 1983 the uranium resource and liason programs of the DOE were transferred from Grand Junction, Colo. to Washington D.C. During the next few years all of the geologic data, etc., that the Atomic Energy Commission (AEC), the Energy Research and Development Association (ERDA), and the DOE had collected from 1947 to 1983 was relocated to the USGS in Denver. Irving B. Gray and Robert Ciesiel were geologists with the Grand Junction Operations Office of the AEC and worked in Monument Valley, Utah and Arizona. During the fall of 1955 and winter of 1955 and 1956, they mapped three uranium mines in San Juan County, Utah on the Holiday and Oljeto mesas and the Harve Black No.2, Black Rock, and Sally mines in Navajo County, Arizona (Plate 1). The Harve Black No.2 mine and the mines in San Juan Country are described elsewhere (Ciesiel and Gray, 1989; Chenoweth, 1990). The map of the Harve Black No. 2 mine shows the geology of the underground workings in cross sections. On all of their other maps, Gray and Ciesiel show the geology on outline maps of mine workings. Much of the information presented in this text was obtained when W.L. Chenoweth was employed by the AEC.