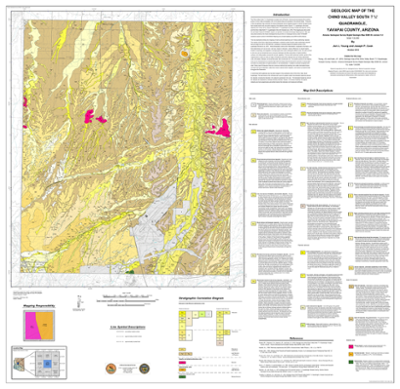 The Chino Valley South 7 ½' Quadrangle is located north of Prescott, Arizona and encompasses the southern portion of Chino Valley immediately north of the Granite Dells and southeast of the Sullivan Buttes. Production of this new geologic map continues the Arizona Geological Survey mapping program of central Yavapai County that includes recent and concurrent mapping in the adjacent Jerome Canyon 7 ½’ quadrangle to the west (Spencer and Young, 2012), Prescott Valley North 7 ½’ quadrangle to the east (Youberg and Spencer, 2012), and the Chino Valley North 7 ½’ quadrangle to the north (Gootee et al., 2010). This map represents entirely new mapping of mainly surficial Quaternary and Tertiary sedimentary deposits. The majority of the Chino Valley South quadrangle is underlain by late Cenozoic clastic sedimentary deposits that are range from 400 to 1600 feet thick, increasing in thickness towards the western portion of the quadrangle (Richard et al., 2007). Aerial photography, stereo photo interpretation, topographic information, and field relationships such as soil color, clast type, degree of dissection, relative differences in deposit heights, landform morphology, and vegetation coverage types were used to distinguish different units. The area covered by this map can be characterized as an erosional landscape with little preservation of original landform surfaces, and rolling swales covered with soil and vegetation. The low-relief central and northern portion of the mapping area is made up mostly of ridges of Quaternary alluvial fan deposits that cap Tertiary sedimentary units, with swales, hillslopes, and broad flat areas often covered with soil. The southern portion of the mapping area can be characterized as somewhat high relief with deeply dissected alluvial fan deposits of varying ages, and little to no preservation of original surfaces or soil characteristics. In addition to alluvial fan deposits and older Tertiary basin-fill deposits, there are numerous relatively high standing river-cobble dominated terrace remnants that record deposition, valley-floor erosion, lateral channel migration, and incision by Granite Creek throughout the Pleistocene.