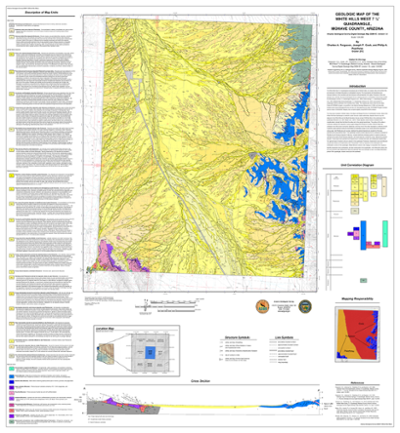 The White Hills West 7½' Quadrangle encompasses part of Detrital Valley, the western flank of the White Hills, and small part of the Black Mountains in northwestern Arizona. This map depicts the Precambrian and Cenozoic bedrock in the mountains and late Cenozoic surficial deposits in the valley. Production of this new geologic map continues the Arizona Geological Survey mapping program in northwestern Arizona that includes the Grasshopper Junction 7½' Quadrangle (Ferguson et al., 2009), Dolan Springs 7 ½’ Quadrangle (Ferguson et al, 2010), Middle Water Spring Quadrangle 7 ½’ Quadrangle (Johnson et al, 2012), and several 7½' quadrangles farther southwest in the Colorado River Valley. The map area is located in Detrital Valley in the Basin and Range Province of northwestern Arizona. Most of the White Hills West Quadrangle is underlain by late Cenozoic clastic sedimentary deposits that are very thin adjacent to the White Hills and the Black Mountains, but are at least 1600 feet thick in the central part of the quadrangle (Richard et al., 2007; Mason et al., 2007). These deposits consist mostly of sandstone and conglomerate in alluvial fans that flank the valley and a fine-grained axial facies. The surface of the valley is covered by relatively thin deposits of various ages ranging from Pliocene to modern. Detrital Valley has undergone very little incision during the Quaternary, and thus most of the valley topography is relatively smooth. In general, upper piedmont areas are dominated by moderately coarse to very coarse alluvial fan deposits of various ages; late Pleistocene and younger, relatively fine-grained deposits are prevalent on the lower piedmonts and along Detrital Wash. The quadrangle contains several large alluvial fan complexes composed of Pleistocene and Holocene deposits. Extensive, complex distributary drainage systems in piedmont areas are outlined by the extent of late Holocene deposits, and broad areas are covered by young, relatively fine-grained deposits. These areas have potential flood hazards due to complex flow paths and widespread sheetflooding. Two general types of bedrock units are present in the quadrangle; Proterozoic metamorphic rocks and Miocene supracrustal volcanic and sedimentary rocks. Precambrian rocks are exposed in the southwestern and northeastern corners of the quadrangle. Middle Miocene volcanic units ranging in composition from rhyolite to basalt are exposed in the southwestern and east-central parts of the quadrangle. In the White Hills, these units are cut by several small-displacement faults and generally dip to the northeast or east. In the Black Mountains portion of the quadrangle, volcanic rocks dip to the southwest.