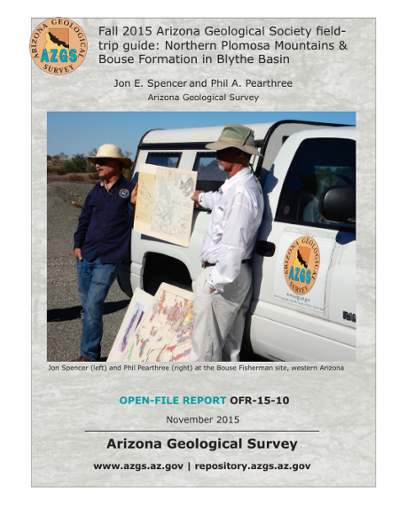 The northern Plomosa Mountains are a small metamorphic core complex in La Paz County, western Arizona. The dominant structure of the range is the Plomosa detachment fault, a low-angle normal fault that separates a single tilted footwall block from a highly extended hanging wall with diverse stratigraphy and complex structure. The northern Plomosa Mountains were first mapped by Scarborough and Meader (1983), with later detailed mapping of smaller areas by Stoneman (1985) and Steinke (1997). The Arizona Geological Survey (AZGS) mapped the northern Plomosa Mountains at 1:24,000 scale (Spencer et al., 2014) with funding from the STATEMAP program, a component of the National Geologic Mapping Act of 1992. This field trip is largely a showcase for geology mapped during the AZGS mapping project. On Day 2 we will be visiting several outcrops of the controversial Bouse Formation in the southern part of the Blythe basin. Bouse deposits were first systematically investigated and formally defined as a geologic formation as part of USGS geohydrology investigations along the lower Colorado River (Metzger, 1968; Metzger et al., 1973; Metzger and Loeltz, 1973). These investigations described the basic characteristics of the Bouse Formation, including: (1) basal carbonate deposits including limestone, tufa (travertine) and marl; and (2) much thicker fine-grained siliciclastic deposits consisting of interbedded clay, silt, and quartz-rich sand that are always stratigraphically above the basal carbonate. Based primarily on interpretations that some of the microfauna found in southern Bouse deposits were marine organisms (Smith, 1970), and to a lesser degree on interpretations of sedimentary environments (e.g., Buising, 1990), the Bouse Formation was interpreted to be entirely marine/estuarine.