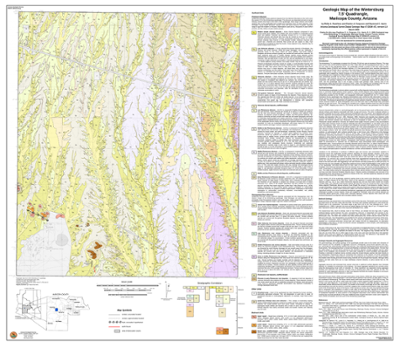 The Wintersburg 7½' quadrangle is located 40 to 50 miles (70-80 km) west of downtown Phoenix. The map area covers much of the piedmont between the Palo Verde Hills and the Hassayampa River and a 7 mile (11 km) reach of the Hassayampa River. The quadrangle includes a portion of the Palo Verde Nuclear Generating Station (PVNGS) and Interstate Highway 10. It has experienced some suburban development associated with the PVNGS and is currently on the outer fringe of the greater Phoenix metropolitan area, so more development is likely in the near future. The small bedrock hills in the southwestern quarter of the quadrangle were mapped by Charles Ferguson in the spring of 2005. Surficial deposits that cover most of the quadrangle were mapped by Philip Pearthree using color aerial photos from 1979, high-resolution digital color orthophotos provided by the Flood Control District of Maricopa County (FCDMC), and topographic information. Field checking was done in the spring, summer and fall of 2005. This mapping was done in conjunction with geologic mapping of the Flatiron Mountain 7½' quadrangle (Spencer et al, 2005) to the north, and this quadrangle map is one of eight 1:24,000 scale geologic maps covering most of the Hassayampa Valley that have been produced in 2004 - 2006. This mapping was completed under the joint State-Federal STATEMAP program, as specified in the National Geologic Mapping Act of 1992.