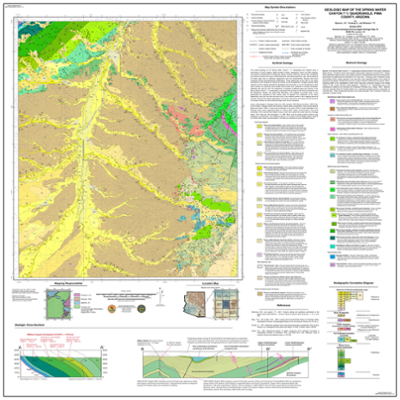 Bedrock in the Spring Water Canyon 7 ½' Quadrangle consists primarily of the Lower Cretaceous Bisbee Group. Formation names were applied during earlier mapping by Finnell (1971). Bisbee Group deposition began during a Late Jurassic period of intracontinental rifting that produced the basal Glance Conglomerate (not identified in the map area). Overlying Lower Cretaceous strata of the Bisbee Group, widely exposed in the map area, were deposited largely in the context of extensional topography inherited from previous Jurassic extension (Dickinson and Lawton, 2001). Overlying strata in the southeastern corner of the map area, previously thought to be middle Tertiary in age, contain dinosaur fossil fragments ( Ferguson, C.A., unpublished) and so are interpreted as related to the Laramide Fort Crittenden Formation (e.g., Hayes, 1987). Bedrock units are generally tilted and broadly folded into a southward plunging syncline, presumably of Laramide age. Felsic hypabyssal intrusions are locally abundant, but it uncertain if these are Laramide or middle Tertiary. The surficial geology of the Spring Water Canyon 7 ½' Quadrangle was mapped using a combination of aerial imagery, digital elevation models, topographic maps, and field mapping. The physical characteristics of Quaternary alluvial surfaces (channels, alluvial fans, floodplains and stream terraces) were used to differentiate their associated deposits by age. Alluvial deposits of similar ages have a distinctive appearance and soil characteristics because they have undergone similar post-depositional modifications. These differences can be seen in the shape and texture of the surfaces as well as the amount of soil development. Younger surfaces retain evidence of their original depositional topography and have little or no soil development, while older surfaces are generally more eroded and rounded with moderate to strongly developed, reddened and clay-rich soil. The distribution of surfaces of different ages and sources in the Spring Water Canyon 7 ½' Quadrangle is associated with Cienega Creek and its tributaries from the Whetstone, Empire and Santa Rita Mountains. The majority of surficial units in this quadrangle are composed of late Tertiary basin fill deposits (Tc). Remnants of the oldest Quaternary units (Qi1 and Qo) are found only in the southern portion of the mapping area and probably represent the highest aggradation in the basin. Alluvial fan and stream terrace remnants of younger surfaces are found along Cienega Creek and its tributaries.