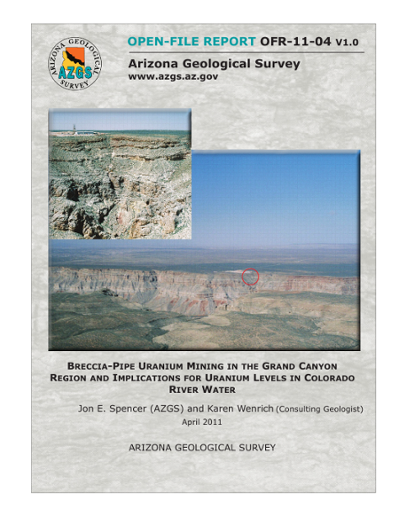 The Grand Canyon region contains over 1300 known or suspected breccia pipes, which are vertical, pipe-shaped bodies of highly fractured rock that collapsed into voids created by dissolution of underlying rock. Some breccia pipes were mineralized with uranium oxide as well as sulfides of copper, zinc, silver, and other metals. Renewed exploration during and following a steep rise in uranium prices during 2004-2007 led some to concerns about contamination of the Colorado River related to uranium mining and ore transport. Total breccia-pipe uranium production as of Dec. 31, 2010 has been more than 10,700 metric tons (23.5 million pounds) from nine underground mines, eight of which are north of Grand Canyon near Kanab Creek. Colorado River water in the Grand Canyon region currently contains about 4 µg/l (micrograms per liter) of uranium (equivalent to 4 ppb [parts per billion by mass]), with approximately 15 cubic kilometers annual discharge. Thus, approximately 60 metric tons of dissolved uranium are naturally carried by the Colorado River through the Grand Canyon in an average year. We consider a hypothetical, worst-case accident in which a truck hauling thirty metric tons (66,000 pounds) of one-percent uranium ore is overturned by a flash flood in Kanab Creek and its entire ore load is washed into the Colorado River where it is pulverized and dissolved during a one-year period to become part of the dissolved uranium content of the river (such a scenario is extremely unlikely if not impossible). This addition of 300 kilograms (660 pounds) of uranium over one year would increase uranium in river water from 4.00 ppb to 4.02 ppb. Given that the EPA maximum contaminant level for uranium in drinking water is 30 ppb, this increase would be trivial. Furthermore, it would be undetectable against much larger natural variation in river-water uranium content.