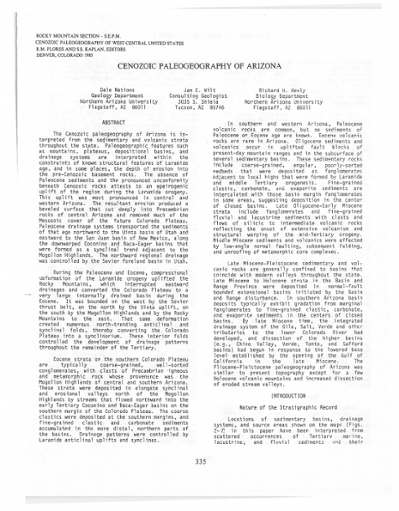 The Cenozoic paleogeography of Arizona is interpreted from the sedimentary and volcanic strata throughout the state. Paleogeographic features such as mountains, plateaus, depositional basins, and drainage systems are interpreted within the constraints of known structural features of laramide age, and in some places, the depth of erosion into the pre-Cenozoic basement rocks. The absence of Paleocene sediments and the pronounced unconformity beneath Cenozoic rocks attests to an epeirogenic uplift of the region during the Laramide orogeny. This uplift was most pronounced in central and western Arizona. The resultant eros i on produced a beveled surface that cut deeply into Precambrian rocks of central Arizona and removed much of the Mesozoic cover of the future Colorado Plateau. Paleocene drainage systems transported the sediments of that age northward to the Uinta basin of Utah and eastward to the San Juan basin of New Mexico, along the downwarped Coconino and Baca-Eager basins that were formed as a synclinal trend adjacent to the Mogollon Highlands. The northward regional drainage was controlled by the Sevier foreland basin in Utah.