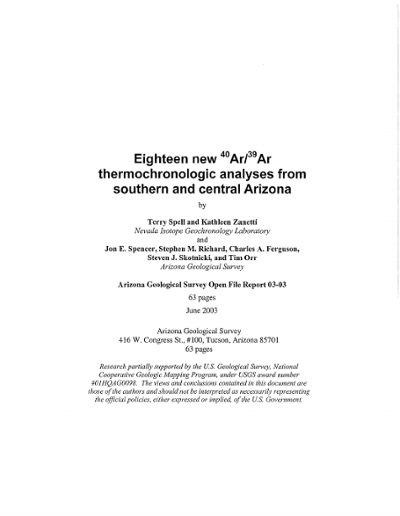 Sixteen rock samples were collected from several mountain ranges in southern and central Arizona to determine their cooling history as revealed by 40 ArP9 Ar thermochronology. This was done by separating minerals, mostly the micas biotite and muscovite, from the rock samples, and analyzing the minerals to determine how much argon they contain (in one case the rock itself was used). The contained argon that is derived from the radioactive decay of naturally occurring potassium-40 can be used to determine how long it has been since the rock cooled below an approximate temperature that is specific to the type of mineral analyzed. At higher temperatures the minerals lose argon that is produced by radioactive decay, whereas at lower temperature they retain it. For a given mineral, the temperature below which argon retention occurs is referred to as the "closure temperature." Closure temperatures are generally considered to be about 300° ± 50° C for biotite, 400° ± 50° C for muscovite, and 500° ± 50° C for hornblende. [McDougall and Harrison (1988) estimated closure temperature at about 325° ± 15° C for biotite (cooling rate 10° to 100° C/m.y.), ~350° C for muscovite, and 525° ± 25° C for hornblende (cooling rate ~ 100° C/m. y.)]. All analyses were done at the Nevada Isotope Geochronology Laboratory at the University of Nevada in Las Vegas, and were analyzed under the direction of Terry Spell. Fifteen of the eighteen mineral separates analyzed for this study were done as part of a mapping project in the Tortolita Mountains and adjacent areas in Pima and Pinal Counties in southwestern Arizona. Another mineral separate from the Buckeye Hills in Maricopa County was analyzed as part of a mapping study west of Phoenix. These two mapping projects were done under the joint State-Federal STATEMAP program, as specified in the National Geologic Mapping Act of 1992. Mapping and laboratory studies were jointly funded by the Arizona Geological Survey and the U.S. Geological Survey under STATEMAP Program Contract #01HQAG0098. The remaining two samples are from areas that were mapped earlier as part of related mapping programs and for which geochronologic data was needed for regional map interpretation and for better understanding of geologic history. ( 63 pages)