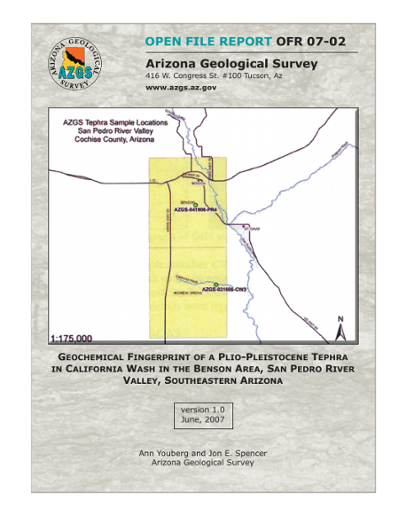 Much of the Plio-Pleistocene sediment in the San Pedro River Valley near Benson (Cochise County, southeastern Arizona) reflects a past depositional environment in which clastic debris was shed from valley-flanking mountains into the basin. The basin interior was characterized by a playa environment that is represented by fine sand, silt, and gypsum, whereas flanking, basin margin areas received conglomerate and sandstone derived from nearby bedrock (Smith, 1994; Youberg et al., 2003; Shipman and Ferguson, 2003). During deposition of these valley-filling sediments, several ash beds were deposited from distant volcanic eruptions. The age of this sedimentary sequence is only approximately known based on vertebrate fossils, magnetostratigraphy, and K-Ar dates on glass from the tephras. Theses studies proposed a Pliocene to Pleistocene age. Similar sediments in the lower San Pedro River Valley, which contain a tephra dated at 6 Ma, include extensive lacustrine (lake) deposits (Dickinson, 2003). The similarity between upper and lower San Pedro Valley filling sediments suggests that they are related and are of similar age, whereas available geochronologic data indicate that the lower San Pedro sediments are significantly older. ( 13 pages)