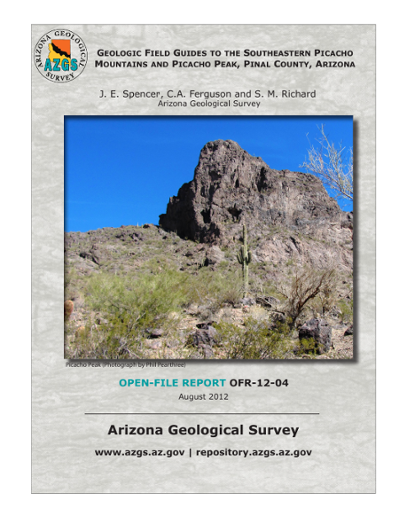 The Picacho Mountains are a north-south trending mountain range in southeastern Arizona that is completely surrounded by Quaternary alluvium. Picacho Peak, located south of the south end of the range, is also surrounded by Quaternary alluvium. Picacho Peak and the Picacho Mountains are separated by a gap of shallowly buried bedrock through which pass Interstate 10 and the Central Arizona Project canal. Although closely related geologically, these two mountainous areas consist of completely different rock types. The Picacho Mountains consist largely of a compositionally diverse suite of Laramide to middle Tertiary biotite granite, muscovite granite, and heterogeneous to gneissic granite (Yeend, 1976; Johnson, 1981a, b; Rehrig, 1986; Richard et ai., 1999). At the southern end of the range, most ofthe crystalline rocks have been affected by middle Tertiary mylonitic deformation. Mylonitization is inferred to have accompanied normal faulting and ascent of the bedrock from mid-crustal depths to near the Earth's surface. Ascent occurred in the footwall of a moderate to low-angle normal fau lt commonly known as a "detachment fault". The crystalline rocks of the Picacho Mountains are part ofthe footwall of a south- to southwest-dipping detachment fault that is exposed only at the base of a small klippe of volcanic rock on a hill top in the southeastern Picacho Mountains. Picacho Peak, which consists almost entirely of northeast dipping basaltic and andesite volcanic rocks, is part of the hanging wall of the detachment fault (Briscoe, 1967; Yeend, 1976; Richard et ai., 1999).