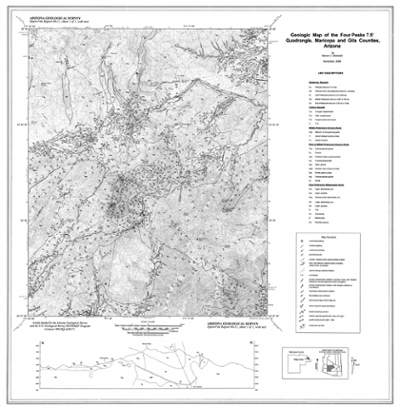 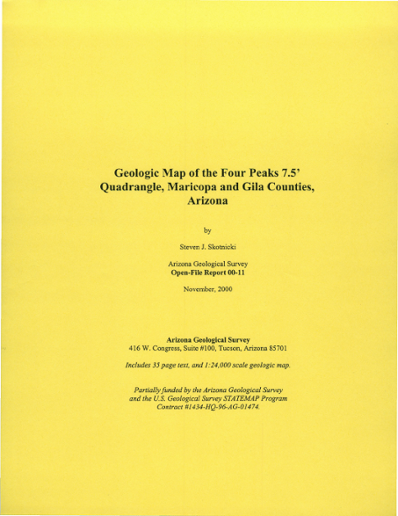 On a clear day the rugged crest of Four Peaks is visible from Phoenix, 50 km to the east-northeast (see figures I and 2). It is one of the highest, most rugged areas in central Arizona. Four Peaks forms part of the high ridge that forms the backbone of the southern Mazatzal Mountains. The Four Peaks quadrangle ranges in elevation from about 2400 feet along Bumblebee Creek in the northeast comer of the map up to 7657 feet at Brown's Peak. Most of the region is extremely rugged and difficult to access. The Four Peaks Road, which branches off State Route 87 at Sugarloaf Mountain (west of the map area), is a good 2-wheel-drive dirt road. The Four Peaks Road becomes the El Oso Road on the east side of the high divide, which is also passable with a 2-wheel drive vehicle. On the east side of the range the road to Three Bar Cabin is also 2-wheel-drive accessible, but the road to Big Oak Flat is very rocky and narrow. The ridge road branching northward from the El Oso Road north to Big Pine Flat is also good, though about 1 mile farther north of Big Pine Flat it becomes rough even for a 4-wheel-drive vehicle. The quadrangle covers a wide range of elevations and bio-zones. On the southwest and northeast comers of the region below about 4000 feet Sonoran Desert vegetation dominates, and includes plants such as saguaro, palo verde, cholla and prickly pear cactus, among others. Above about 4000 feet Sonoran Desert vegetation gives way to dense chaparral vegetation including scrub oak, manzanita, desert mahogany, sumac, and others. The thick chaparral blankets the landscape and creates a nearly impenetrable, dense thicket. This was a major obstacle to detailed mapping in the higher elevations. Fortunately, (or unfortunately) the 1996 Lone Fire that originated near Pigeon Spring burned most of the thick chaparral from the Brushy Basin southward to beyond the southern boundary of the map. In many places dense, ghostly woodlands remained, composed of the charred skeletons of trees and shrubs. Mapping for this project was carried out mostly during May 1997, May 1998, and April-May 1999, during which time I observed the rapid regrowth of the vegetation. Conifer forests grow on a few of the north-facing slopes near Four Peaks and Buckhorn Mountain. During this study most of the trees in these patches of forest were burned. One report and one map sheet, 1:24,000 map scale.