Geology of the Fortuna Mine, Yuma County, Arizona 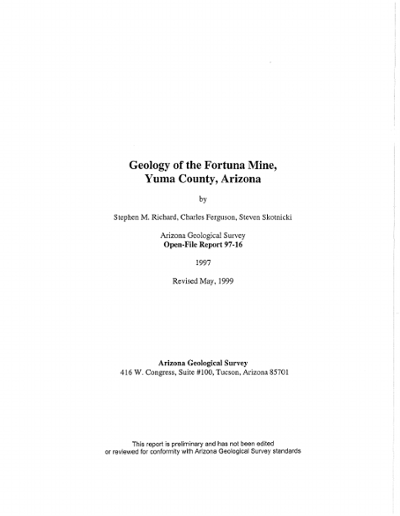 The Fortuna mine is located on the western side of the central Gila Mountains in southwesternmost Arizona (Figure 1), just east of the western fork of the Camino del Diablo. The mine is located on a group of patented claims now within the Barry M. Goldwater Gunnery Range, which is owned by the U. S. Bureau of Land Management, but administered by the U. S. Marine Corps. Access to the mine requires obtaining a permit at the headquarters of the Gunnery range in Yuma. The Fortuna deposit was discovered in late 1894 by Charles W. Thomas, William H. Halbeli, Peter Farrell and Laurence Albert (or Albert Laurent) [Baker, 1980]. hl 1896 the property was sold to Charles D. Lane, who organized the La Fortuna Gold Mining and Milling Company. Lane was a major stockholder in the Harquahala (or Bonanza) Mine, near Salome, Arizona, which was running out of ore at the time. Most of the mining crew from the Harquahala was transferred to the new mine at Fortuna [Buse, 1968]. The company built a mill at the mine site and laid a 4 inch pipeline more than 12 miles from a well on the Gila River flood plain near Blaisdell to supply water [Blake, 1898]. Prof. William P. Blake visited the mine in 1897 and his report, transcribed from a lecture to students at the 'School of Mines' (University of Arizona?), was included in the Report of the Territorial Governor to the Secretary of the Interior for 1898. The original production shaft was located on a low hill (referred to here as Mill Hill) about 250 feet southwest of the main vein outcrop and was inclined 60° to N034E (all bearings reported measured in degrees clockwise from north) [Wilson, 1933]. 15 p.