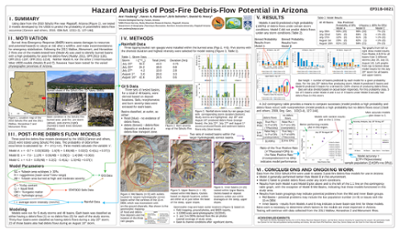 In June, 2010, the human-caused Schultz Fire near Flagstaff burned 6,100 ha of mostly steep terrain. Subsequent rains from the 4th wettest monsoon on record produced numerous debris flows, significant erosion, and substantial flooding of the downslope residential areas. In May and June of 2011, 3 very large human-caused wildfires (Wallow, Horseshoe 2, and Monument Fires) burned over 320,000 ha, posing serious threats to communities below burned slopes. The USGS assisted the Burned Area Emergency Response (BAER) teams, tasked with rapid assessment of damages from wildfires, in predicting the probability of post-fire debris flows from burned basins using models developed for this purpose [Cannon and others, 2010, GSA Bull, 122(1-2), 127-144]. These models, while providing quick results, have not been evaluated for use in Arizona’s varied physiographic provinces. Here we use data from the Schultz Fire to compare basin responses with the modeled probabilities from the 3 USGS post-fire debris-flow models (Models A, B and C). Data from the Schultz Fire includes detailed field documentation of debris-flow occurrence and runout distances, 1:12,000 stereo aerial photographs, photogrammetrically derived 1- and 3-m digital elevation models (DEMs), 10-m USGS DEMs and tipping-bucket rainfall data. Hydrologic responses from 48 nested basins burned by the Schultz Fire were assessed for debris or flood flow occurrences. Thirty-four basins produced debris flows during a July 20th storm that had a peak 10-minute intensity of 24 mm. A second storm on August 16th, with a peak 10-minute intensity of 15 mm, produced additional debris flows in 23 of the same basins. Morphometric, soils, and burn severity data from the 48 basins were entered into the 3 USGS models along with average rainfall intensity and storm totals from 5 storms, including the July 20th and August 16th storms. Models A and B predicted a high probability (≥60%) of debris flows in 33 and 53 basins, respectively, for the July 20th and August 16th storms. Data from the other 3 storms resulted in 0 basins from Model A and 4 basins from Model B with a predicted high probability of debris flows. Model C failed to predict debris flows under any of the study storm conditions. Detailed data and documented debris-flow occurrences from the 2010 Schultz Fire provides an opportunity to compare post-fire basin responses in Arizona with predicted responses from the USGS post-fire debris-flow models. This work is continuing with data from the 2011 Wallow, Horseshoe 2 and Monument Fires.