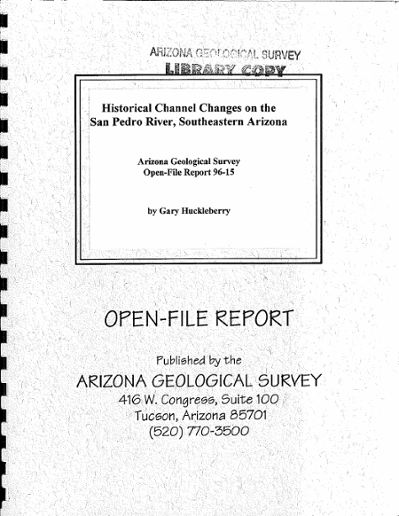 The San Pedro River in southeast Arizona is by no means a major watercourse in the Southwest, but yet it is probably one of the most-studied rivers in the region. In particular, the upper San Pedro River has been the topic of study by geologists, geographers, hydrologists, and ecologists interested in environmental change (see Bahr, 1991 and Cooke and Reeves, 1976 for an overview). Since 1870, inhabitants of the San Pedro River Valley have witnessed substantial vegetation change (Bahr, 1991; Henderson and MinkIey, 1986; Hastings, 1959; Hastings and Turner, 1965; Leopold, 1951) as well as changes in the geometry and hydrologic regime of the river (Cooke and Reeves, 1976; Hereford, 1993; Hereford and Betancourt, 1993). After decades of multidisciplinary research, the chronology of historic channel changes, at least on the upper San Pedro River, is well defined, although the reasons why the channel has changed are still debated (i.e., natural vs. anthropogenic forces). What the physical characteristics of the San Pedro River were in 1912 is the topic of this report. Because the State of Arizona's claim to ownership of river channels within its boundaries hinges on their navigability at time of statehood, this report is designed to provide baseline information on the historical physical characteristics of the San Pedro River channel and how they have changed through time. It is clear that the San Pedro River was experiencing changes in channel geometry in 1912, but unfortunately there are few descriptions of the channel during that year. The physical characteristics of the river thus must be interpolated from descriptions made before and after 1912. Understanding the geomorphic properties of the river helps to refine the interpolation. ( 35 pages)