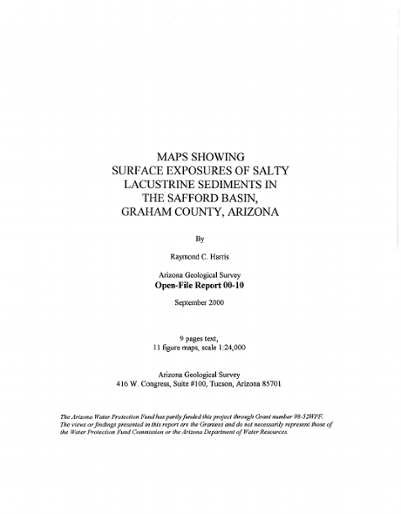 The Safford basin is a deep, sediment-filled structural trough containing abundant lacustrine (lake) and playa sediments, reflecting long periods of closed-basin conditions. Gravity models indicate that the Safford basin is up to 12,000 feet deep (Oppenheimer and Sumner, 1980; 1981). Soluble minerals such as halite (salt), carbonates, gypsum, and anhydrite are common in the basin-fill sediments (Marlowe, 1961; Harbour, 1966; Harris, 1997, 1999). These minerals commonly form by evaporation of water and deposits formed in this way are called evaporites. In this report, the singular word 'salt' refers to halite, whereas the plural 'salts' refers to any soluble evaporite mineral. Typical Basin-and-Range basins were formed in the late Tertiary (12-6 million years, Ma), when high-angle normal faulting dropped central blocks between uplifted bounding blocks, forming a more or less symmetrical, deep structural basin. The Safford basin, however, was formed earlier than Basin and Range time by low-angle faulting resulting from crustal extension. Detachment faulting during the mid-Tertiary (30-20 Ma) extension formed the metamorphic core complex of the Pinaleiio Mountains and the tilted structural basin of the Safford Valley (Spencer and Reynolds, 1989; Kruger and others, 1995). Later Basin and Range faulting did not affect the Safford region to the extent that it did other areas of the southwest. ( 9 pages)