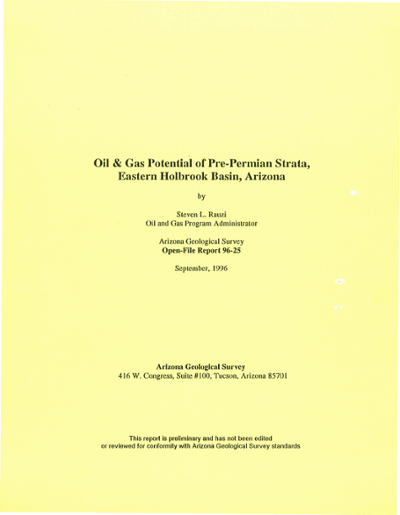 Pre-Permian strata have been the objective of several oil and gas tests drilled in the eastern Holbrook Basin, Arizona. This has been a reasonable and valid pursuit especially in light of the many shows of oil and gas recorded in pre-Permian units in wells drilled in the eastern Holbrook Basin (Peirce and Wilt, 1970; Conley and Giardina, 1979). Most tests have targeted Devonian rocks, which are strongly petroliferous in outcrop south of the Holbrook Basin along the Mogollon Rim and in Salt River Canyon (Huddle and Dobrovolny, 1952) and contain asphalt in fractures between Payson and Pine (Conley, 1975). Geochemical analysis of Devonian mudstones in Salt River Canyon have a total organic carbon content of 2.81 percent and are within the oil generating window (Desborough, Poole, Daws, and Scarborough, 1984, p. 54). Devonian strata in northeastern Arizona, north of the Holbrook Basin, have produced approximately 100,000 barrels of oil in the Walker Creek Field (Rauzi, 1996). As a result, hydrocarbons may well have been generated in Devonian source rocks at depth in the eastern Holbrook Basin.