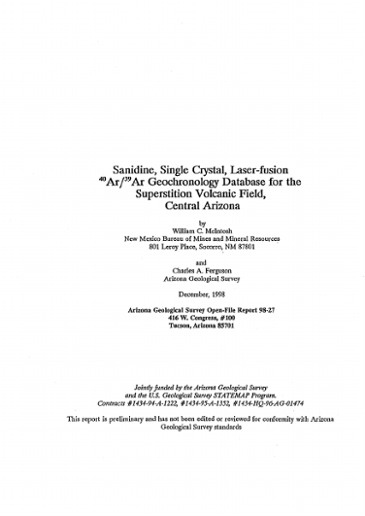 The Superstition volcanic field or Superstition - Superior volcanic field (Sheridan, 1978) of central Arizona has had a long, complex history of geological investigation. Starting along its eastern edge with studies of the Globe-Miami copper district (Ransome, 1903) work has continued for nearly one hundred years mainly in the rugged Superstition Mountains along the eastern fringe of the Phoenix metropolitan area (eg. Peterson, 1960, 1968, 1969; Peterson and others, 1983; Stuckless and Sheridan, 1971; Sheridan and others, 1970; Sheridan, 1987; and Sheridan and Prowell, 1986). Investigations initiated in 1994 by the Arizona Geological Survey concentrated on detailed (1:24,000) mapping of 7.5' quadrangles in the Superior area, Whitlow Canyon area, Goldfield Mountains, Santan Mountains, Superstition Mountains, and along the lower Salt River Canyon (Figure 1). Early on in the investigation, it was determined that the area's stratigraphic framework was considerably different from previous interpretations and that the volcanic field's geochronology was poorly resolved. The previous stratigraphic framework and nomenclature was exceptionally complex (Skotnicki and Ferguson, 1995; Trapp, 1996). Previous workers (principally Stuckless and Sheridan, 1971; Sheridan, 1987) had concluded that the field included at least three large ash-flow tuff cauldrons and that the duration of volcanism spanned over 10 million years from the latest Oligocene (27 Ma) to middle Miocene (15 Ma).