Yavapai: The Land of Opportunity 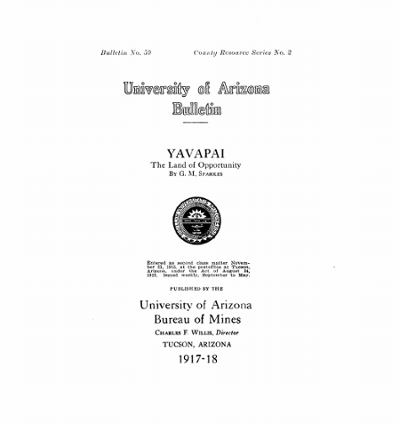 University of Arizona Bureau of Mines

Yav-a-pai was the name given hy the Apache Indians to all of northern Arizona. It means, literally, the mountain country, being derived from "yava" (the hills and "pais," pronounced pie) a corruption of the Spanish name "pais" (land). Ever since the adventurous Coronado and his daring band, in 1540, went forth in search of the "Seven Cities of Cibola, whose wealth was beyond count," legends of immense treasures buried in the deep recesses of the mountains, and guarded by the fierce Apache, have made the name of Arizona a synonym of magic wealth, mystery and romance. Of all pursuits, that of mining has the greatest fascination, and to many brings the most intense and satisfactory pleasure. It was a leading industry from the very earliest historical record. Ancient and modern history is full of reference to the bounteous results from the persistent pursuit of mining. In the time of Abraham, gold and silver, as the medium of exchange, were handled by weight; hence were mined in quantities, as is done now. The pursuit of the "Golden Fleece" has been actual as well as mythical. The life of every argonaut, ancient and modern, is itself an Illiad. There never has been a civilization in which mining has not been a prime factor. Egypt, Carthage, Rome, Spain all in the highest of their glory were prominent in gold, silver and metal production and all decayed when they lost control of their mines. 9 p.

Bulletin No. 59
County Resource Series No. 2

Public Domain: This material has been identified as being free of known restrictions under U.S. copyright law, including all related and neighboring rights.