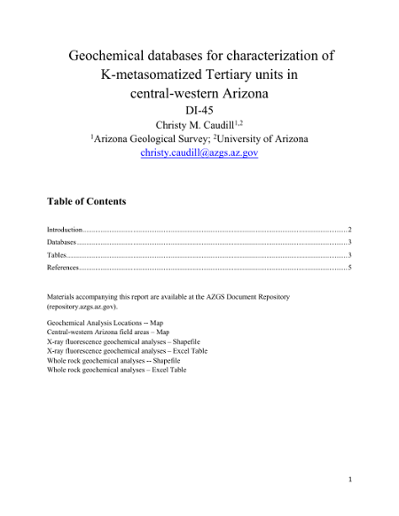 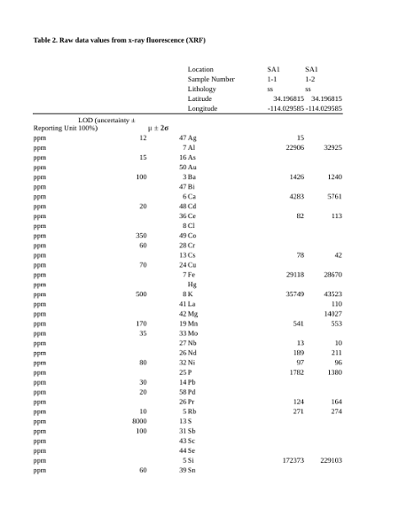 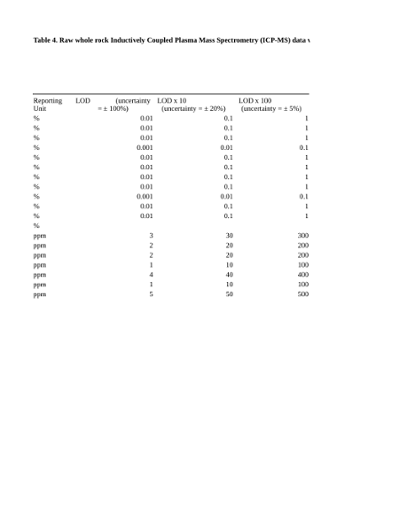 Tertiary sedimentary units in central-western Arizona are of interest because they evince evidence of potassium alteration and because they host Mn, Fe, and Cu mineral deposits. Little work has been done to characterize these units geochemically. Mineralization typically occurs as replacement ores and as disseminated to massive tabular ores (particularly the manganese deposits), and as fracture and fault filling deposits (Spencer and Welty, 1986). Mining districts in this province have produced copper, manganese, iron, and gold as well as lead, zinc, and silver accompanied by common gangue minerals, including: quartz, calcite, chlorite, and barite. Manganese production in the Buckskin-Rawhide Mountain area totaled approximately 24 million pounds of Mn; the Artillery Mountains district yielded more than 93 million pounds making it the largest manganese producer in the United States (Spencer and Welty, 1986). Associations between K-metasomatism and detachment-related mineralization have been suggested in the southwestern United States (Chapin and Glazner, 1983; Brooks, 1986; Chapin and Lindley, 1986). Alteration due to infiltration K-metasomatism, often associated with hematization, was the dominant process responsible for mineralization in the Tertiary strata. Similar alteration assemblages indicating K-metasomatism (secondary K-feldspar-quartz-calcite and hematite) have been previously mapped in central-western Arizona south to Picacho Peak (Brooks, 1986), north to the Artillery Mountains, and west to the Whipple Mountains, spanning over 40,000km2.