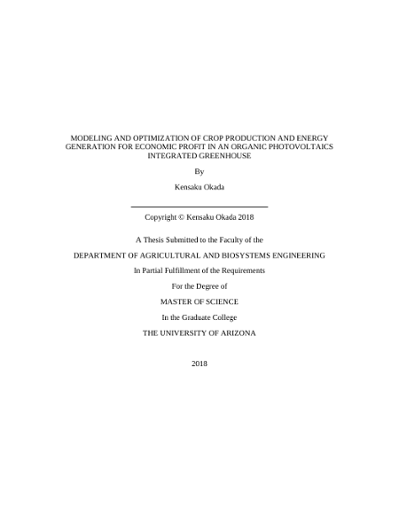 This study aimed to achieve the following two goals; first, developing an inclusive model which simulates solar irradiance to a tilted surface, electric energy generated by organic photovoltaic (OPV) modules on tilted greenhouse roof, light transmittance through multi-span greenhouse roof, solar irradiance available at the crop canopy level in the greenhouse, the crop (lettuce in this study) growth and yield, the energy consumed by greenhouse system for cooling and heating, cost and sales of electric energy and the crop. Finally, the model also determined the total economic profit achieved by the optimization program which computed the coverage ratio of OPV module, the period of shading curtain deployment for crop cultivation before and after summer period during which no crop cultivation occurred. The developed model also enables these analyses by adjusting the property of modeled PV modules, thus making it possible to study both organic (typically semi-transparent and flexible) and inorganic (opaque and solid) PV modules. To optimize the economic profit under the assumed environmental and economic conditions, MIDACO solver (http://www.midaco-solver.com/) was adopted. It can solve mixed integer non-linear programming (MINLP) problem by combining an extended evolutionary Ant Colony Optimization (ACO) algorithm with the Oracle Penalty Method for constrained handling (MIDACO-SOLVER, 2018, http://www.midaco-solver.com/index.php/download). All the simulation and optimization source code were written in Python 2.7. The optimization algorithm was licensed by MIDACO solver. The simulator can serve as a building block for further research about Agrivoltaics with new materials including OPV, and can be further enhanced with additional sub-simulation algorithms by other programmers and researchers interested in this field. The optimization results showed that, in Tucson, a semi-arid climate condition, the overall profitability could be increased by extending the cultivation of the lettuce into the summer, using both the shading curtain and OPV modules while decreasing high solar irradiance transmitted into the greenhouse and air temperature inside. The optimized OPV module coverage ratio was 58.0% when assuming its depreciation was completed, cell efficiency was 4.3%, visible light transmittance was 30%, the overall temperature coefficient was 0.02%, and the selling price of generated electricity was same as the purchase price, which was around 0.11 to 0.12 USD/kWh in Arizona. This indicated that the profit of lettuce cultivated in summer exceeded the cultivation cost in summer (labor cost and cooling cost) with a combination of PV module and shading curtain with a simple strategy that changes its deployment time each month according to the monthly average DLI: Thus, high-tech equipment for curtain control may not be required. At the optimal 58.0% OPV deployment rate, the amount of electricity generated per unit area basis was 47.7 kWh/m2 (satisfying 45.7% of the electricity consumption by greenhouse cooling, which was assumed to be the only factor consuming electricity) and the lettuce crop yield was 57.9 kg/m2, with an economic profit generated at 460.5 USD/m2. The simulation code developed also allows user or grower to evaluate alternative OPV coverage ratios and shade curtain deployments providing results on potential electricity generation, crop yields and economic profits. Although the profit made by electricity production with the current OPV film was much less than that of lettuce production, and further analyses should be conducted replacing various assumed values with available real data. The simulation result suggested some shading curtain and lettuce cultivation strategies in arid and semi-arid regions which had a potential to improve the profitability when OPVs integrated with a greenhouse system.