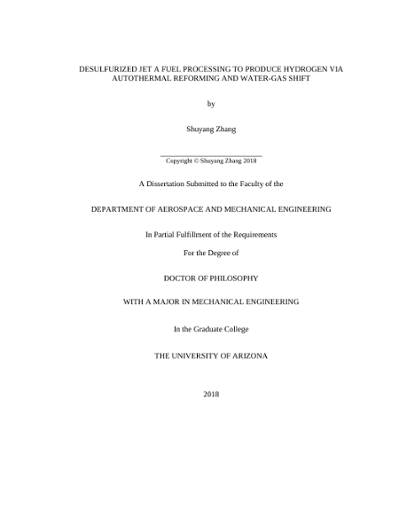 Hydrogen is an alternative fuel which is well recognized as one of the solutions to the fossil fuel depletion problem. As an energy carrier, hydrogen can be used to store and deliver energy or be converted into other types of energy, such as heat, electrical energy or mechanical work. Among all the applications, fuel cell is drawing increasing attention for its advantages such as higher theoretical energy conversion efficiency, no internal moving mechanical parts and environmentally friendly. Almost all the common fuel cells require hydrogen gas as the fuel source oxidized to complete the half-reaction redox cycle, which makes hydrogen gas a crucial factor for the development of fuel cell technique. However, under some certain circumstances, hydrogen supply could be extremely constrained by the harsh environment. For example, fuel cells used onboard has critical requirement on the space and extremely limited energy source, which makes carrying extra hydrogen tanks not an option in most cases. Therefore, onboard hydrogen production via catalytic autothermal reforming (ATR) and water-gas shift (WGS) is considered beneficial to vehicles using fuel cells as auxiliary power unit because it eliminates the challenges of hydrogen storage and delivery. The objective of this research is to develop a fuel processing system with reliable ATR and WGS catalysts to produce hydrogen feasibly from Jet A fuel, which is used as the primary fuel for both civilian and military transportation. Jet A fuel is expected to be converted into hydrogen gas, so that when considering onboard fuel cell applications, extra tanks of natural gas, ammonia or other hydrocarbons are not necessary. However, before the process can be examined, the sulfur component containing in the Jet A fuel must be removed because sulfur can easily poison the catalysts participating in the conversion reactions and even the catalysts in the downstream fuel cells. An effective and reliable in-house-made adsorbent was developed through simple procedures and cheap raw materials. The adsorbent has a very large surface area of over 250 m2/g with the optimal sulfur adsorption capacity of 2.95 mg-S/g-ads at the breakthrough point of 50 ppmw S in effluent fuel. A kwth-class fuel processing testing system was designed and fabricated afterwards in the lab to examine the system performance through experiments. The ATR of n-dodecane, working as the surrogate of Jet A fuel, was firstly studied with the initial simplified system under different operating conditions for better understanding each of the reactions. The compositions of system effluents in dry gas basis were detected by an on-site GC instrument and the gas temperature at distinct locations were monitored by a bunch of thermocouples connecting to a data acquisition (DAQ) system purchased from National Instruments company. Three indices, hydrogen yield, fuel conversion and energy efficiency were calculated based on the experimental results to evaluate the system performance. In addition, a novel in-house-made honeycomb-type ATR catalyst was synthesized in the lab with exceptional catalytic activity. The hydrogen molar fraction in the reformate was stable at over 40% from 500 oC to 700 oC with the maximum hydrogen yield achieved at close to 2.1. After that, the ATR of desulfurized Jet A fuel was investigated in a modified system and compared with the n-dodecane case. The results show that they had very different behaviors and ATR of Jet fuel was significantly difficult than ATR of the pure hydrocarbon with the highest hydrogen molar fraction of 30% and yield of 1.4 obtained at 700 oC. Coke suppression was discovered regarding the higher fuel conversion under certain operating conditions. To further decrease the carbon monoxide concentration and increase hydrogen yield, water-gas shift reaction was introduced after the ATR reformer so that the exhaust heat would not be wasted. Thus, it is required to perform the thermodynamic analysis and heat transfer modeling of the overall system consisted of an ATR reformer, a WGS reactor and two countercurrent flow heat exchangers (recuperators) to theoretically determine how large would the heat exchanging area be enough. By examining the required energy that is used to preheat the reactants and the reaction energy that could be possibly transferred to the reactants, the overall process has a potential to be self-sustainable, indicating the system does not require large amount energy input once the process is initiated. Finally, WGS reaction performance was studied in the overall fuel processing system with the same evaluation indices as the ATR process. Results show that with the WGS reaction, hydrogen production is increased together with CO suppressed.