A Total Eclipse of the Net: The Dynamics of Network Shutdowns and Collective Action Responses 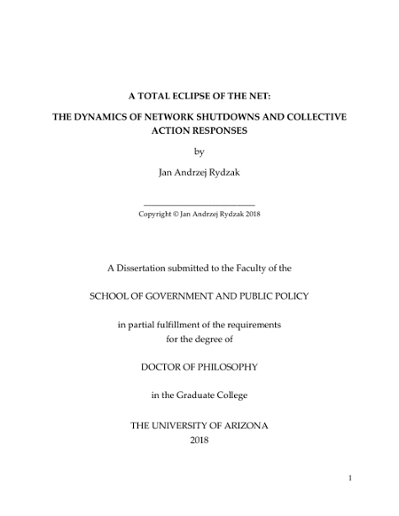 At what juncture do governments begin or cease to overtly interfere with digital networks? Does large-scale suppression of communication technology affect traditional collective action in the streets? This dissertation first explores the conditions under which states face and resolve the dictator’s dilemma (Kedzie 1997) – a conundrum in which allowing for the development of communication technology and stifling it may both enable collective action and exert pernicious effects on the government’s ability to stay in power. I then proceed to investigate the effects of network shutdowns – deliberate, large-scale blackouts of digital communication – on collective action, building on established theoretical work on resource mobilization and the repression-dissent nexus. In the first empirical chapter, I find that, between 1995 and 2011, the pace of expansion of Internet access – but not cell phone penetration – was a strong predictor of the frequency of government-initiated interference in telecommunications. However, these dynamics are not linear: at an annual pace of expansion of approximately 7 percent, interventions into digital content peak and begin to decline. In this period, governments that presided over very rapid expansion of communication networks appeared to refrain from visibly interfering with digital information flows. I describe the tipping point in this uneven trajectory as a digital threshold. The study also reveals that restrictions to digital communication in the period leading up to the Arab Spring do not seem to be related to government propensity to repress the population physically, but are positively related to other limitations to free expression. Egypt’s government created a critical juncture during the Arab Spring in the first complete Internet shutdown aimed at suppressing protest. After 2011, the use of network shutdowns as a means of controlling collective action spread rapidly, transforming into a form of digital repression with a wide impact radius. In the second empirical chapter, I advance the narrative of digital repression into the period between the Arab Spring and 2016 through a detailed, daily-level study of network shutdowns and collective action. During a network shutdown, a key socio-organizational resource is abruptly withdrawn, creating a low-information environment where collective action takes on distinct trajectories. The study focuses on the temporal dynamics of disconnected protest, acknowledging that new, blanket forms of repression may produce different dynamics of collective action in the short and long term. Using a global sample, I demonstrate that network shutdowns are linked to a surge of protest in the short run, but maintaining the blackout beyond the first week leads to a digital siege, which is associated with lower rates of protest. This dual finding contrasts with established scholarship on the ‘repression-dissent nexus,’ which generally agrees that continued repression brings bout a temporary decline in protests followed by a re-emergence in the long run. In this way, disconnective action is qualitatively different from its traditional counterpart, which benefits from the affordances of communication technology to build momentum as connective action (Bennett & Segerberg 2013). In the third empirical chpater, I pursue these dynamics further by conducting a subnational, quantitative study of India. In addition to a diverse array of collective action endeavors and high incidence of protest, India registers the highest number of shutdowns of any country, with approximately 230 events between 2012 and mid-2018 (SFLC 2018). Where Chapter 3 focused on temporality, here I turn my attention to the strategy and structure of disconnective action. I use daily event data, disaggregated by state, to demonstrate that violent mobilization increases in frequency during a blackout and that protesters may execute a tactical shift to non-violent methods only when blackouts are paired with state violence. At the same time, shutdowns disrupt the typical growth trajectory of non-violent protest, which is affected by the information vacuum. Furthermore, when collective action is broken down according to its primary organizing actors, shutdowns appear to have a disruptive, yet inconsistent effect, both on collective action organized by structured actors and more loosely organized, ‘leaderless’ protest. Both in India and in other parts of the world, shutdowns enable more uncertain and chaotic interaction between security forces and demonstrators, compounded by considerable socioeconomic costs. As a whole, this dissertation demonstrates how established theories of interactions between repression and dissent can be extended to new repressive phenomena, and how these phenomena resonate in collective action in the streets.