The Effect of Social Interaction on Isolated Older Adults 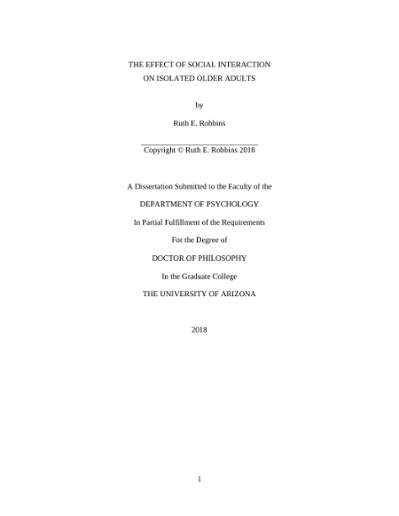 In 2050, the population of those aged 65 years and above is projected to be 83.7 million, almost double the estimated population of those 65 and older in 2012 (West, Cole, Goodkind & He, 2014). Therefore, efforts to promote successful aging and maintain quality of life in this population are increasingly important. However, according to the U.S. Census Bureau, 11 million, or 28% of those aged 65 and older, lived alone in 2010 and one-fifth of seniors did not participate in any weekly or monthly activities (West, Cole, Goodkind & He, 2014). This lack of social involvement with others can lead to social isolation, which can have detrimental mental and physical health effects. Alternatively, those who remain socially and cognitively engaged have better cognitive, emotional and physical outcomes. Isolated older adults are rarely involved in research (Greaves & Farbus, 2006; Nicholson, 2012) because of the difficulty in accessing them. However, they may represent the greatest need for cognitive stimulation and social connection. Therefore, the current study was designed to expand upon the work of Myhre, Mehl, & Glisky (2016) by recruiting an isolated older adult population to learn and use Facebook. This study compared learning and using Facebook (a cognitive and social task) with a social engagement-only group. Two undergraduate students were paired with each isolated older adult in the Facebook and Social conditions. A primary aim of the current study was to test whether socially-isolated older adults would achieve greater cognitive and social benefits from learning and using Facebook for 7 weeks than from engaging in purely social interactions for the same time period. A secondary aim was to measure if the amount of Facebook use (total Facebook word count for each participant and time spent on Facebook) had a moderating effect on cognitive and social outcomes. We hypothesized that learning and using Facebook would have beneficial effects on cognitive functioning and perceived social support compared to a purely social intervention. Additionally, we hypothesized that more active users of Facebook would experience greater benefits. Results revealed that data from two cognitive measures, both requiring the executive function of shifting, were numerically in the direction consistent with our hypothesis that learning and using Facebook could improve performance on cognitive functioning above and beyond a social only intervention and relative to a no-treatment control group. Social outcome data from two measures of perceived social support were also numerically in the right direction relative to the social only intervention group, consistent with our hypothesis that online social engagement would lead to greater social benefits. Additionally, there was a significant improvement in the undergraduate research assistants’ attitudes towards older adults after working with senior participants for an 8-week period. Results suggest that intergenerational working partnerships between college students and isolated community older adults can improve college students’ positive attitudes towards older generations.