Characterizing the Accumulation of Arsenic, Cadmium, Mercury, Nickel, Lead and Zinc in Culturally Relevant Crops and Intercropping as a Public Health Intervention Strategy 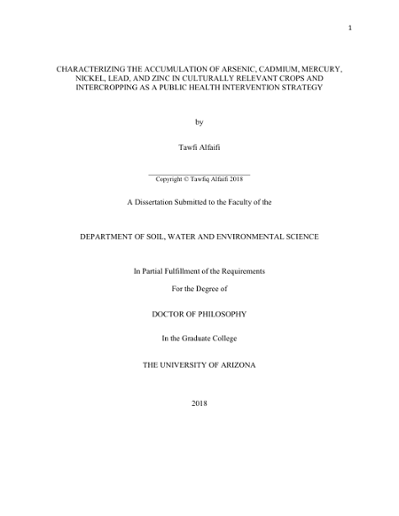 Resource extraction activities have significantly impacted soil quality and health. In order to protect human health, many studies have been conducted to determine whether crops accumulate contaminants of concern, particularly arsenic and heavy metals. However, the accumulation patterns of some crops have not been thoroughly characterized. Currently, culturally relevant crops like the sesame, arugula and corchorus have received little attention. Arsenic and heavy metals are well reported near mining and other resource extraction activities. These metal(loid)s accumulate in soils, degrade water bodies, and can be absorbed by crops posing a risk to human health. A controlled greenhouse study with four soil treatments was conducted to determine the uptake pattern of arsenic (As), cadmium (Cd), lead (Pb), mercury (Hg), nickel (Ni) and zinc (Zn) in arugula, corchorus, and sesame. The soil treatments included: T1 (0%), T2 (25%), T3 (50%), and T4 (75%) of mine tailings waste mixed with garden soil. The concentrations of As, Cd, Hg, Ni, Pb and Zn varied from 4.7 -1,500, 0.2 - 6.4, 0.04- 8.6, 4.6 - 7.5, 19 – 1,400, and 73.3 – 2,150 μg g-1 respectively. The mine tailing waste used was from the Iron King Mine and Humboldt Smelter (IKMHSS), an abandoned legacy site located in Yavapai County, Arizona, United States. These plants were selected due to their popularity, cultural relevance, and monetary value. A follow-up study using arugula and the sunflower was conducted to determine whether intercropping could serve as a form of phyto-protection. In the initial study, As, Pb, and Hg were translocated throughout the Sesame plant. Bioconcentration factors (BCF) were determined and showed that As, Pb and Hg uptake decreased in the order of: roots > seeds > leaves > pods >stems. The seeds of sesame showed an elevated accumulation of Cd, Ni and Zn The edible portions of arugula and corchorus were investigated for their storage capacities of As, Cd, Ni, Pb and Zn. Arugula hyperaccumulated Cd (BCF were greater than 1) in T1, - T3 and corchorus hyperaccumulated Cd in T3 only. The three crops showed increasing mean values of all metal(loids) as the percentage of mine tailings increase. Second, we compared these results to: 1) Food and Agriculture Organization of the United Nations/World Health Organization’s Codex Alimentarius International Food Standards (which is a program that provides general guidance and a set of non-enforceable reference values for certain contaminants and toxins in food (Codex, 2018); and 2) the US Food and Drug Administration Market study, which is a program that monitors the contaminants and nutrients in the average US diet (USFDA, 2018). All sesame, corchorus, and arugula plants grown in all treatments exceeded both the Codex reference standards and US Food and Drug Administration Market study reported values. Due to the noteworthy accumulation of As and heavy metals in the selected plants, a phyto-protection strategy was conducted and the intercropping of arugula and the sunflower plants was examined. The sunflower was used to determine whether it had the capability to protect arugula when they are intercropped (grown together). The results showed that the sunflower absorbed more Zn than the arugula, but no statistically significant difference was observed for As, Cd, Pb and Zn in the arugula tissues intercropped with sunflower. However, there was a decrease of As, Cd, Pb and Zn concentrations in the sunflower roots when grown with arugula, which may be associated with intercropping with arugula. Additionally, sunflower hyperaccumulated Ni while arugula hyperaccumulated both Zn and Cd. Interestingly, the concentration of Ni increased in both the sunflower and arugula when intercropped. The findings of this study indicated that sesame, corchorus, and arugula plants can take up As and heavy metals in soils mixed with mine tailings and are able to translocate these contaminants to the edible portions of the plant. This study indicates that more precaution should be taken when growing these plants near metal contaminated sites. Lastly, based on this study reported here, intercropping may be able to protect crops from some metals only. More research is needed to determine whether intercropping may serve as a form of public health intervention or other methods should be practiced to protect crops.