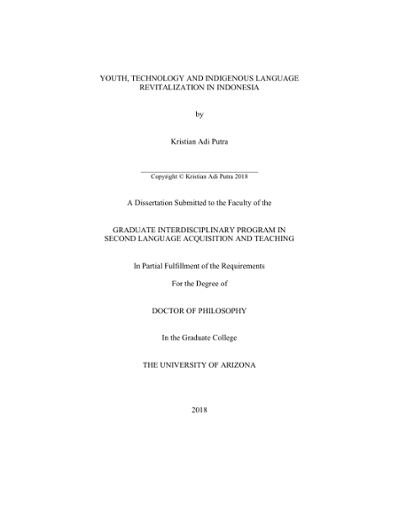 The three studies in this dissertation were carried out with the intention of showing how Indigenous communities in critically endangered language settings can “bring their language forward” (Hornberger, 2008) by encouraging Indigenous youth participation and integrating technology into Indigenous language revitalization efforts in and out of educational settings. Indigenous youth play a pivotal role in determining the future of their languages (McCarty, et. al, 2009). However, youth are often situated in contexts where they no longer have adequate supports to learn and use their Indigenous languages (Lee, 2009; McCarty, et.al, 2006; Romero-Little, et.al, 2007; Wyman et al, 2013) and Indigenous languages are continuously marginalized and unequally contested by other dominant languages (Tupas, 2015; Zentz, 2017). The study within was situated in a multilingual and multicultural urban area in Indonesia marked by complex dynamics of language shift and endangerment in and out of school settings, where the teaching of Indigenous language at school was managed by the local government and limited as a subject to two hours a week. However, the study also documented multiple existing and potential resources for language revitalization, and demonstrated possibilities for building language revitalization efforts on youth language activism and the availability of technology in and out of schools. In the first study, I examined the implementation of Lampung teaching in schools in Bandar Lampung, looking at the outcomes, challenges, and achievements of existing programs, and available resources for further developing and improving the programs. In the second study, I present ethnographic vignettes of three Indigenous youth and young adult language activists from three different Indigenous communities in Indonesia, highlighting how study participants initiated wide-ranging language activist efforts, and suggested new ways to encourage other youth to participate in Indigenous language revitalization. In the third study, I invited eight young adult language activists to share their stories of language activism with students in three Lampung language classrooms in Bandar Lampung, Indonesia, and help facilitate students’ Lampung language learning and use in online spaces together with Lampung language teachers. In the three studies, I triangulated quantitative data from sociolinguistic surveys and writing and speaking tests with qualitative data from interviews, focus group discussions, observations and documentation of language use in on and offline contexts. Overall findings from the three studies show how positioning youth and young adults as a resource (Wyman, et. al, 2016), and building on young peoples’ engagement with contemporary technology as a tool (Thorne & Reinhardt, 2008; Reinhardt & Thorne, 2017), can help youth learn, use and advocate for their Indigenous languages, offering hope for supporting language vitality in the future. Findings also demonstrate the potential for top down and bottom up language planning initiatives (Hornberger, 2005) to support youth Indigenous language learning and use beyond classroom settings, and encourage youth participation in community efforts to reverse language shift.