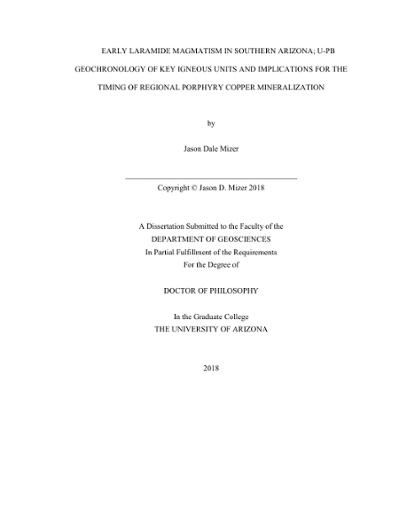 Subduction of the Farallon slab under North America during Late Cretaceous time resulted in compressional forces that deformed and uplifted southern Arizona and produced widespread magmatism in several distinct periods. During early Laramide time voluminous eruptions of intermediate volcanic rocks and the emplacement of mostly barren intrusive centers occurred in the region. Subsequent magmatism resulted in the emplacement of numerous productive (porphyry copper) deposits, associated Ag-base metal deposits, and barren intrusive units. The timing of these events has been loosely constrained by early K-Ar ages and cross-cutting field relationships; in many districts early Laramide volcanic rocks host much of the porphyry mineralization, but the genetic relationship between intrusive and extrusive units in multiple districts remains poorly understood. The focus of this work is to investigate the timing of early Laramide magmatic events at several localities in southern Arizona (Silver Bell, Chilito/Christmas, Copper Creek, San Manuel, Cerro Colorado/Oro Blanco districts, Rosemont, Ajo, Texas Canyon/southern Winchester Mts., Dos Cabezas Mts., southwestern Santa Rita Mts., Granite Peak (Whetstone Mts.), and Tombstone), with an emphasis on regional volcanic units proposed by previous researchers to be 1) regionally equivalent in age and 2) genetically associated with the emplacement of porphyry copper mineralization. This investigation presents new U-Pb in zircon ages on key igneous units across southern Arizona to constrain the onset of early Laramide magmatism and to compare the timing of mineralization in several key mining districts with these early events. The objectives of this investigation are accomplished through systematic collection of early Laramide volcanic and intrusive rocks in mineral districts and areas adjacent to or believed to be associated with or known to host porphyry copper. This investigation presents 77 new U-Pb in zircon ages, one new U-Pb in monazite age, one new U-Pb in apatite age, two new Re-Os ages, and two new Ar-Ar age from intrusive and volcanic units across southern Arizona to document timing relationships through geochronology. Special attention was given to areas where intrusive and volcanic rocks are proximal to each other (within ~10 km, taking into account Cenozoic extension), and in districts where Ag-base metal mineralization is prominent and proposed to be associated with porphyry copper systems. The results of this investigation show that there is no single early Laramide volcanic unit that predates porphyry copper mineralization regionally. Geographic exposures of early Laramide volcanic rocks are distinct in age and may predate nearby mineralization by as little as 2 million years, and sometimes as many as 17 million years. These new data suggest that, while Laramide volcanic and intrusive rocks are present locally, they are likely not closely related. These results suggest Laramide magmatism in southern Arizona occurred in at least two phases: 1) early Laramide = large-volume volcanism (dominantly andesitic) ~80 – 71 Ma (possibly as old as 86 Ma), and 2) middle to late Laramide = high volume intrusive, very little volcanism (dominantly intrusive with rarely accompanying volcanism) 71 - ~55 Ma (with outlying intrusive units as young as 46 Ma). The results of this investigation also more tightly constrain the timing of sedimentation, contractional deformation, volcanism and subsequent intrusive events in the region.