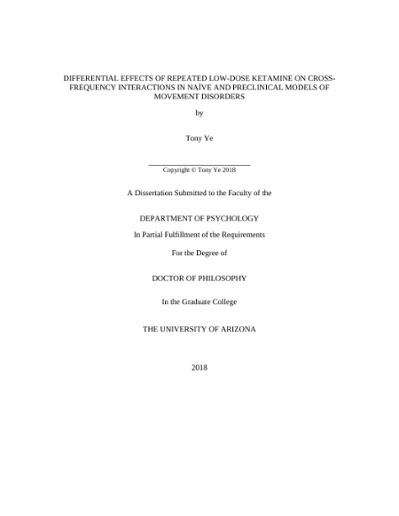 Ketamine is a well-established anesthetic in high-doses that has been in use for over 50 years (Domino et al., 1965). At low sub-anesthetic doses, ketamine is therapeutically effective at treating a wide range of disorders such as treatment-resistant depression (Berman et al., 2000; Diamond et al., 2014), chronic pain (Hocking and Cousins, 2003; Niesters et al., 2014) and post-traumatic stress disorder (PTSD) (Feder et al., 2014). Recent retrospective case reports have identified sub-anesthetic ketamine as a novel treatment for L-DOPA-induced dyskinesia (LID). Infusions in human parkinsonian patients with LID lead to a reduction of dyskinesia for up to one month (Sherman et al., 2016), with similar findings in an animal model of LID using repeated injections to mimic patient infusions (Bartlett et al., 2016). Despite its therapeutic success, the oscillatory mechanisms underlying ketamine’s anti-dyskinetic properties are unknown. These lasting effects may be due to ketamine’s pervasive ability to modify oscillatory patterns throughout the brain (Hunt and Kasicki, 2013). Ketamine-induced oscillatory activity may contribute to the prolonged reduction of motor fluctuations as observed in previous work (Bartlett et al., 2016; Sherman, 2016). Furthermore, ketamine may also have a therapeutic role in treating Parkinson’s disease (PD). Hypersynchronous beta (15 – 30 Hz) is the pathological oscillatory signature of PD. Additionally, gamma oscillations are pro-kinetic and voluntary movement exhibits a decrease in beta with an increase in gamma (Muthukumaraswamy, 2010). Administration of low-dose ketamine in healthy patients reduced beta oscillations in the cortex (de la Salle et al., 2016; Ma et al., 2018) and increased gamma across regions (Shaw et al., 2015). Surgical treatments for PD such as Deep Brain Stimulation (DBS) triggers high-frequency stimulation (>140 Hz), DBS reduces beta to restore motor function (Little and Brown, 2014). A potential secondary mechanism is the reduced beta-gamma cross-frequency coupling in motor cortex (de Hemptinne et al., 2015a). Given that ketamine induces both gamma oscillations and high-frequency oscillations (HFOs), it is conceivable that ketamine exposure in an animal model of PD may produce similar therapeutic benefits as DBS. Using the experimental protocols of Bartlett and colleagues (2016) with the addition of measuring local-field potential activity, we show that the pathological oscillations associated with Parkinson’s disease (e.g., beta (15 – 30 Hz)) in 6-hydroxydopamine (6-OHDA)-lesioned animals are not reduced after ketamine exposure. In LID animals, we observed that L-DOPA triggers region-dependent low-to-wide-band gamma oscillations. This contrasts with the existing literature where a strong focal 80 Hz gamma response was found after L-DOPA (Dupre et al., 2016; Halje et al., 2012a). These differences are likely due to our use of a clinically-relevant extended L-DOPA priming protocol. To our knowledge, we are the first to report a new L-DOPA-induced spectral response in a LID animal. We observed that repeated ketamine exposure does not provide acute or chronic reductions in the overall power of L-DOPA-induced gamma oscillations. Ketamine does produce differential effects on cross-frequency interactions. Ketamine enhanced coordination between low and high frequencies in the striatum, but with the opposite effect in the hippocampus. In LID animals, ketamine reverses theta coupling triggered by L-DOPA in the DMS and NAc. Furthermore, antagonism of opioid-, D1-, and D2-receptors did not affect ketamine-induced oscillations during L-DOPA treatment. Taken together, our results suggest that ketamine-induced oscillations do not underlie its therapeutic benefits in LID, but may trigger the initiation of gradual synaptic reorganization (Phoumthipphavong et al., 2016b) and growth-factor production (Garcia et al., 2008; Yang et al., 2013) resulting in the long-term reduction of LID (Bartlett et al., 2016; Sherman, 2016) that may not necessarily be reflected in oscillatory activity.