Planning and Operational Analyses for A New Intercity Transit Service 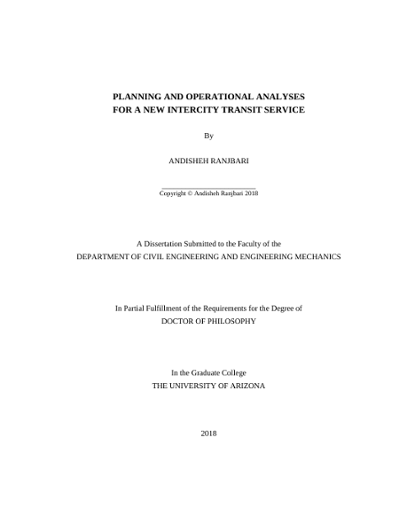 Intercity travel has been on the rise in the last few decades, resulting in severe congestion on intercity freeway corridors. Existing modes such as air, rail, and bus services have respective limitations and have not been effective in alleviating the present and future intercity travel challenges. Our proposed solution is ‘Flexpress’, a flexible and express intercity transit service that is conceived and designed to accomplish three major operating characteristics: high speed, high capacity and high accessibility. Flexpress will offer service in tire-based low-profile transit vehicles, capable of cruising at up to 150 mph on a dedicated lane on freeways, and will have multiple terminals in urban areas to provide passengers with higher levels of accessibility to their origin and destination. In the urban area, the vehicles will be driven by a driver at regular traffic speeds while picking up/dropping off passengers at terminals, but once entering the dedicated lane, the driver initiates the auto-pilot mode and the vehicle will travel with maximum speed, until reaching the metro area, where the driver regains control. This dissertation is focused on planning and operational analyses for the proposed Flexpress service. As a case study, Flexpress is considered as an intercity transit service between the metropolitan areas of Tucson and Phoenix, in Arizona, USA. A demand analysis study is conducted to model the mode choice behavior of individuals when making intercity travel and to identify the significant factors influencing their mode choices. The feasibility and potential market of Flexpress is studied in competition with other intercity travel modes such as drive, rail, regular bus, and demand-responsive shuttle service. To collect the behavioral data, an interactive Stated Preference survey is employed that estimates the respondent-specific attribute values in a real-time manner, customized to the individual information provided by the respondents. Such a process helps present a choice set that reflects each individual’s travel context more realistically. The collected data showed that a transportation option with the characteristics of Flexpress has the potential to take up a considerable market share, even larger than driving. Having estimated a discrete choice model, the significant factors influencing the choice preference were recognized, and the analysis provided insightful findings toward intercity mode choice behavior and improving intercity transit services. As a side study, an analysis is conducted to investigate the effects of alternatives’ labels on people’s choice making behaviors and also to understand how and why the respondents change their choices once they learn about alternatives’ labels. To design the Flexpress network, a network design problem formulation and solution procedure is presented for intercity transit services that have multiple routes and serve multiple terminals in the origin and destination cities. The proposed solution procedure consists of three steps: 1) a set of candidate terminals are selected; 2) candidate routes are generated between those terminals using a k-shortest path algorithm; 3) a mixed-integer linear optimization model finds the optimal routes, terminals, frequencies, fleet size and depot locations, given a set of constraints and the objective of minimizing total passenger travel time and vehicle deadheading time. The solution procedure was implemented for Flexpress service in the study corridor. The final routes found by the model looked reasonable, and the sensitivity analysis showed that the objective function is most sensitive to changes in the minimum demand satisfaction ratio and then to the maximum number of routes and the maximum fleet size. A solution framework is also proposed for operational analysis and financial assessment of transit services that considers the passenger behavior and the elasticity of transit demand to service characteristics. The proposed solution framework integrates a dynamic transit passenger assignment model with the intercity mode choice model and an adopted service design module, and iterates these methods until an equilibrium between fares and frequencies is reached. The transit assignment model, called Fast-Trips, is a schedule-based and capacity-constrained model that considers hyperpaths in transit route choice and captures passenger behavior at a high resolution. The solution framework was implemented for Flexpress service in the study corridor, and the system performance is studied for multiple fare policy and frequency design scenarios. The results showed that the scenarios with designed-oriented frequencies had lower ratios of revenue to operating cost (R/C ratio), compared to those where frequencies were set based on the passenger path choice behaviors and route usage. The R/C ratio increases with an increase in fares and a decrease in frequencies, but the sensitivity analysis indicated that there are multiple ways to achieve a certain R/C ratio. So, it would be the other objectives and the operator’s priorities that define the final design and service characteristics. Moreover, it was shown that if frequencies are designed efficiently, not only will the system be profitable, but also with an increase in fares, it may be possible to achieve high R/C ratios to account for the capital costs as well.