Multilevel Optimization for Resilient Planning and Operations of Interdependent Infrastructures 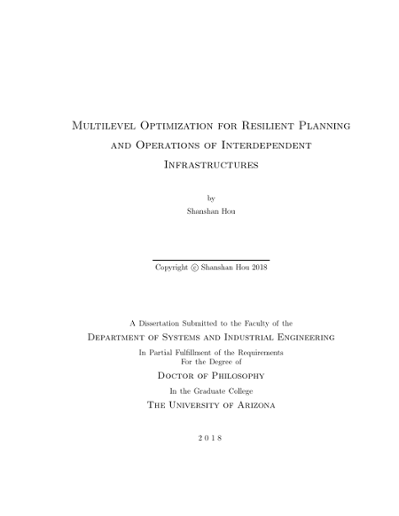 In general, infrastructure is defined as "the physical components of interrelated systems providing commodities and services essential to enable, sustain, or enhance societal living conditions" (Fulmer, 2009). With the development of scientific technology and social economy, many infrastructures become highly interconnected and interdependent. The interdependence is the mutual reliance between two or more groups. To satisfy future human needs for a better quality of life and sustainable society development, the planning and operations or management of infrastructures should not only meet the resilience standards, but also consider the complexity factors such as interdependencies among infrastructures to achieve societal and economic goals. Interdependencies are significant at specific of hazard intensities and tend to quickly propagate the effects. An event in one system will lead vulnerabilities of the other systems, which means the failure of partial elements in one system may trigger failures of dependent elements in other systems, and this may happen recursively as cascading failures. Vulnerability analysis is helpful to detect the critical parts of infrastructures which should be protected, especially under potential cascading failures. In this study, we apply multilevel optimization approaches to model the interdependent infrastructure planning and operations or management. Multilevel optimization focuses on the hierarchy structure, in which the decisions are taken in different levels. The constraint domain associated with a multilevel optimization problem is implicitly determined by a series of optimization problems which must be solved in predetermined sequences. Generally, multilevel optimization is suitable for the problems in which each decision maker just controls part of decision variables, and there is a hierarchy of all decision makers. First, we study interdependent energy and water networks. Energy network provides power for water extraction, collection, pumping operation and water or wastewater treatment. Water network supplies water to energy generation, cooling system and equipment cleaning. These two networks comprise an interdependent network, and rely on each other. The nexus between energy and water has emerged as a significant issue concerning the economics, reliability, and resilience of both systems. Most of current approaches deal with the planning and operations or management of an isolated network as an integration, but few research on system expansion has considered the interdependence between energy and water systems, resulting in plans that might have poor performance due to water or energy availability in the future. It is the time to consider water and energy as interdependent network to make multilevel decisions in the planning and operations or management periods. We propose a long-term energy and water system expansion planning framework that not only models the operations of both systems but also captures the interdependence between the operations of energy and water systems. This is a coordinated and unified intelligent system-wide optimization approach to incorporate intra- and inter-infrastructure decisions. Second, we propose a mixed integer programming model to study the operations of power grid with renewable energy integration and water limitations. The development of the renewable energy helps decrease the energy resources shortage pressure and greenhouse gas emissions. However, the intermittency issues of renewable energy put a burden for integration. We propose the robust optimization modeling approach to deal with the uncertainty issue of the renewable energy. Considering the electricity generation, water is the most important resource. It is necessary for thermal power plants, hydropower plants, and also the renewable energy power plants. The amount of water used in the cooling system is large. But the water supply amount may be strictly limited in some areas due to the different water availability. The electricity power generation could be affected by the total water supply amount in the system. On the other hand, the water usage to generate per unit of electricity power in different types of energy sources could be changed in the future as technology develops. These are two aspects we need to consider about the water sensitivity analysis. Last, we choose the power grid and its control communication network as a case to analyze the vulnerability of interdependent infrastructures. The power grid provides power for the communication network's operation, and the communication network controls the power grid's performance. Due to the complex connections between them, the vulnerability of each network increases dramatically. The removal of critical nodes or edges in power grid will not only affect the nodes and edges in this network, but also influence the nodes and edges in the communication network. The presence of interdependencies could dramatically augment the vulnerability of infrastructures through cascading failures. The failures may initially happen in the power grid, then go through into the communication network, and go back to the power grid, repeating this process till the final steady state. This cascading failure could trigger the most severe loss in the interdependent networks. We propose integer programming models to identify the most vulnerable network elements (nodes and edges) whose removal will result in minimal survivable mutually connected components after the cascading failure process. Taking some measurements to protect the most vulnerable elements could help redesign and rebuild the networks more resilient.