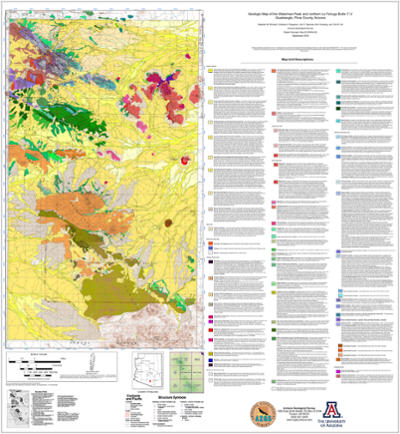 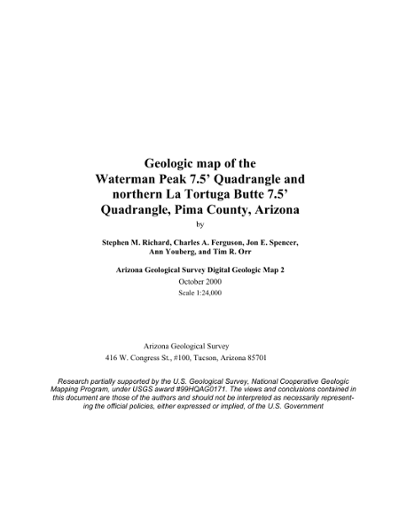 The map area includes the Waterman Mountains and northern part of the Roskruge Mountains. These ranges are located in the Basin and Range Province of southern Arizona, and consist of groups of small mountain peaks and hills that are part of a north-south trending belt of bedrock flanked to the east and west by late Cenozoic basins. This belt of bedrock, which also includes the Baboquivari and Silverbell Mountains, is almost certainly a horst bounded by buried normal faults and flanking grabens or half grabens. Based on regional timing relationships, it is generally thought that east-west extension and associated uplift of the ranges and subsidence of the basins occurred approximately between 5 and 15 Ma (Middle to Late Miocene). This was preceded by late Oligocene-Early Miocene, large-magnitude extension accommodated by low-angle normal faults including the Catalina-Rincon and Coyote Mountains detachment faults (Figure 1) [Gardulski, 1990; Dickinson, 1991]. The Roskruge, Waterman, and Silverbell Mountains occupy the hanging wall of both detachment fault systems. Hanging wall rocks above the Catalina-Rincon detachment fault have been translated to the southwest relative to mylonitic footwall rocks now exposed in the Picacho, Tortolita, Santa Catalina, and Rincon Mountains. Hanging-wall rocks above the Coyote Mountain detachment fault were translated to the north-northeast relative to mylonitic rocks now exposed in the Coyote Mountains [Davis, 1980; Gardulski, 1990; Ferguson et al., 2000]. These mid-Tertiary detachment faults have been dismembered by Basin and Range faulting.