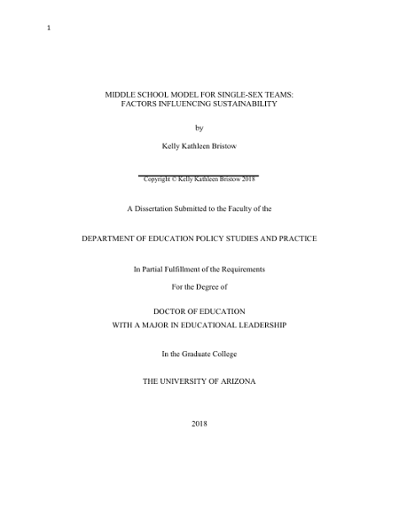 Boys and girls have structural and developmental brain differences that may lead them to learn and perform differently. Brain scans have shown that the sexes even use different areas of their brains when performing similar tasks. There are many solutions to increasing student competency, one of which is single-sex classes. Single-sex classes are an educational option in some schools in an effort to increase student learning by using gender-specific strategies to address the different learning styles of boys and girls. A literature review shows that results of such classes have been mixed, with no reported single-sex class programs sustained beyond two to three years. Program sustainability literature focuses on health science programs and reveals several prediction factors for implementation success, including the facilitation process, resources, school-based leadership, implementers, external environment, compatibility, external leadership, and innovation characteristics. This qualitative case study sought to answer two research questions: 1) What is the structure and organization of the single-gender grade-level teams at this middle school? 2) What factors contributed to the sustainability of the single-gender grade-level team model? The study was conducted at a middle school in an urban area of an eastern state with approximately 1400 students in grades 6th, 7th, and 8th. Data were gathered from multiple sources, including face-to-face interviews, online and paper documents, email communications. The study site was one of 16 middle schools in a school district that supported specialty schools/programs as an educational option for students. Findings revealed a detailed grade-level team structure at the school that had been in existence for 11 years at the time of this study. Students had the option of enrolling in a coeducational track or opting-into a girls-only track or a boys-only track for their 6th, 7th, and 8th grade years. Students from outside of the school’s boundaries were allowed to open-enroll in the same gender program as space permitted. Teachers volunteered to teach on the same gender teams and were screened by administration. Interview participants identified administrator support and buy-in, parental community support and program success as the primary reasons for the same gender program’s sustainability. During the planning, preparation and implementation of their same gender grade-level team structure, leaders at this middle school took into account all eight sustainability factors described in Bosworth, Gingiss, Potthoss & Roberts-Gray (1999). Participants noted professional development and an administrative structure of team leadership supported sustainability. Findings map well to other models of implementation (Rogers, 2003; Schwarz-McCotter, 2008; Spielhagen, 2011). This study maps well with the literature and findings can facilitate implementation of other initiatives for sustainability. Research recommendations include investigating other schools that implement single-sex teams to produce a manual or guide book to help schools integrate single-sex classes and/or teams into their institution. Further research could also include a study on how transgender students are incorporated into a same gender program. Two quantitative studies may add to the literature base: 1) a study of the end-of-course test data from this study site and all other middle schools in this district to determine if the same gender program has a significant impact on test scores, and 2) a study of disaggregated end-of-course test data from the study site to compare scores of girls in the same gender program to scores of girls in the coeducation program, and scores of boys in the same gender program to scores of boys in the coeducational program, to determine if the same gender program is academically better for boys or girls. Interviewing students and parents from the study site could add rich information to the field about the reasons behind their desire to enroll in the same gender program. The final recommendation for future research is an exploratory study into the reasons for the enrollment differences between the White and Hispanic students in the same gender program at CMS to potentially explain ethnic views of the innovation.