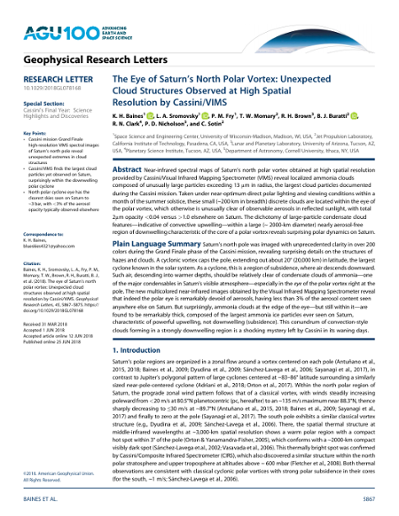 Near-infrared spectral maps of Saturn's north polar vortex obtained at high spatial resolution provided by Cassini/Visual Infrared Mapping Spectrometer (VIMS) reveal localized ammonia clouds composed of unusually large particles exceeding 13m in radius, the largest cloud particles documented during the Cassini mission. Taken under near-optimum direct polar lighting and viewing conditions within a month of the summer solstice, these small (similar to 200km in breadth) discrete clouds are located within the eye of the polar vortex, which otherwise is unusually clear of observable aerosols in reflected sunlight, with total 2-m opacity <0.04 versus >1.0 elsewhere on Saturn. The dichotomy of large-particle condensate cloud featuresindicative of convective upwellingwithin a large (similar to 2000-km diameter) nearly aerosol-free region of downwelling characteristic of the core of a polar vortex reveals surprising polar dynamics on Saturn. Plain Language Summary Saturn's north pole was imaged with unprecedented clarity in over 200 colors during the Grand Finale phase of the Cassini mission, revealing surprising details on the structures of hazes and clouds. A cyclonic vortex caps the pole, extending out about 20 degrees (20,000km) in latitude, the largest cyclone known in the solar system. As a cyclone, this is a region of subsidence, where air descends downward. Such air, descending into warmer depths, should be relatively clear of condensate clouds of ammoniaone of the major condensables in Saturn's visible atmosphereespecially in the eye of the polar vortex right at the pole. The new multicolored near-infrared images obtained by the Visual Infrared Mapping Spectrometer reveal that indeed the polar eye is remarkably devoid of aerosols, having less than 3% of the aerosol content seen anywhere else on Saturn. But surprisingly, ammonia clouds at the edge of the eyebut still within itare found to be remarkably thick, composed of the largest ammonia ice particles ever seen on Saturn, characteristic of powerful upwelling, not downwelling (subsidence). This conundrum of convection-style clouds forming in a strongly downwelling region is a shocking mystery left by Cassini in its waning days.