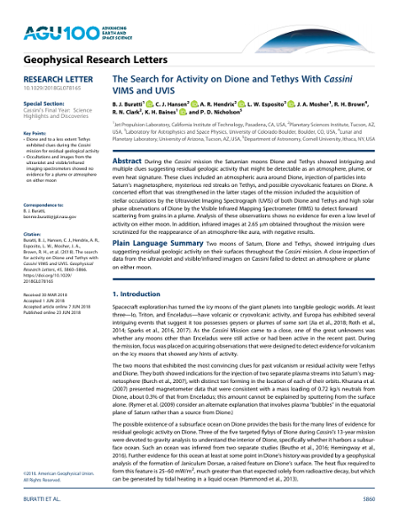 During the Cassini mission the Saturnian moons Dione and Tethys showed intriguing and multiple clues suggesting residual geologic activity that might be detectable as an atmosphere, plume, or even heat signature. These clues included an atmospheric aura around Dione, injection of particles into Saturn's magnetosphere, mysterious red streaks on Tethys, and possible cryovolcanic features on Dione. A concerted effort that was strengthened in the latter stages of the mission included the acquisition of stellar occulations by the Ultraviolet Imaging Spectrograph (UVIS) of both Dione and Tethys and high solar phase observations of Dione by the Visible Infrared Mapping Spectrometer (VIMS) to detect forward scattering from grains in a plume. Analysis of these observations shows no evidence for even a low level of activity on either moon. In addition, infrared images at 2.65m obtained throughout the mission were scrutinized for the reappearance of an atmosphere-like aura, with negative results. Plain Language Summary Two moons of Saturn, Dione and Tethys, showed intriguing clues suggesting residual geologic activity on their surfaces throughout the Cassini mission. A close inspection of data from the ultraviolet and visible/infrared imagers on Cassini failed to detect an atmosphere or plume on either moon.