Sedona Sinkholes and Groundwater Flow: The Geologic History of Their Evolution, Coconino and Yavapai Counties, Arizona 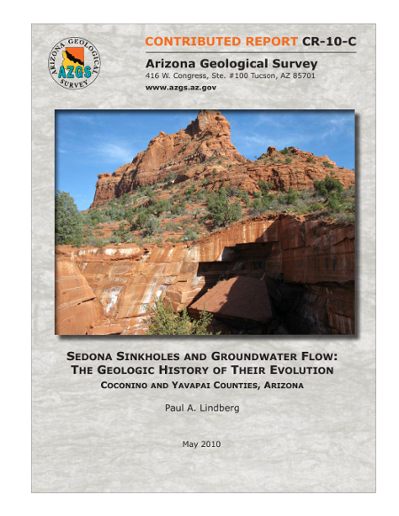 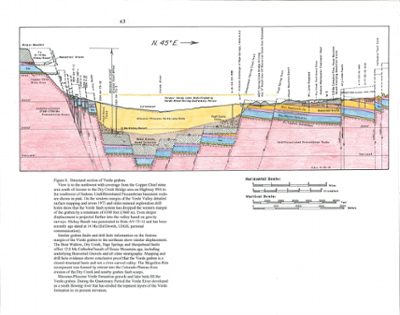 Seven sinkholes surround the city of Sedona in Coconino and Yavapai Counties, Arizona. They occur in surface bedrock of Permian age Esplanade Sandstone, Hermit formation, and Schnebly Hill Sandstone, but the causative source is from the collapse of subsurface water-filled caves in Mississippian Redwall Limestone that underlies those formations. The original Mississippian-age Redwall karst surface has undergone two additional phases of dissolution enlargement in later geologic time. The first occurred after the Laramide uplift of the Mogollon Highlands when northeast flowing streams penetrated the exposed Redwall Limestone erosion surface, and the second took place following the generation of the Verde graben ~10 million years ago when regional drainage reversal took place. Pre-graben Miocene basalt lava flows that overlie eroded Paleozoic strata are present on either side of, and faulted within, the Verde graben closed depression. Post-graben erosion generated the Mogollon Rim escarpment in the northern portion of the Verde Valley and allowed surface streams to erode the broad Dry Creek and Margs Draw valleys. Oak Creek fault, and the erosion of its canyon, is much younger than the faulting that generated the Verde graben. Over time water flow through the Sedona area evolved from surface flow to dominantly groundwater flow, mainly due to leakage through abundant northwest-southeast oriented rock joints and permeable fault zones into underlying cavernous Redwall Limestone. USGS oxygen isotope studies show that water recharge entering the northeastern part of the Upper Verde watershed, and passing beneath the greater Sedona area, originated high on the Colorado Plateau above 6900 feet before discharging at a rate of ~15 millions of gallons per day at artesian springs in the Page Springs area to the southwest of Sedona. Dissolution caves in the underlying Redwall Limestone have now enlarged to the point where their sandstone roof rocks have collapsed into limestone caves over the past several thousand years. Devils Kitchen sinkhole has historic records of collapse in the 1880s, 1989 and 1995, and it will continue to collapse in future years. Six additional sinkholes are in various stages of collapse from modern time and possibly to the end of the last Ice Age. While the danger of future collapse is probably minimal to humans, unregulated septic leakage into hidden sinkhole breccias within the town limits could contaminate groundwater being tapped for municipal use or the contamination of the Page Springs outflow. The report contains geologic maps, cross sections, photographs and individual features of the sinkholes as of the end of 2009.