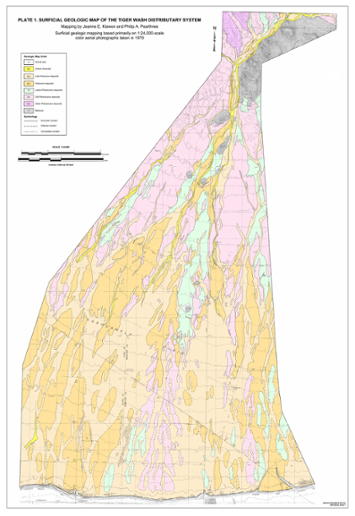 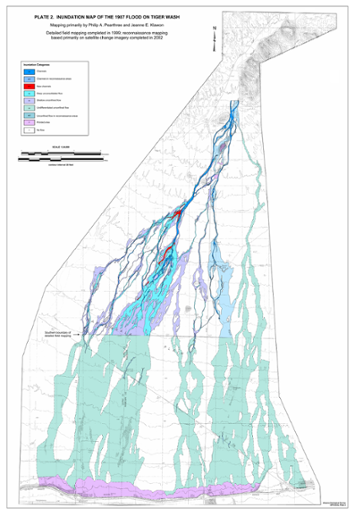 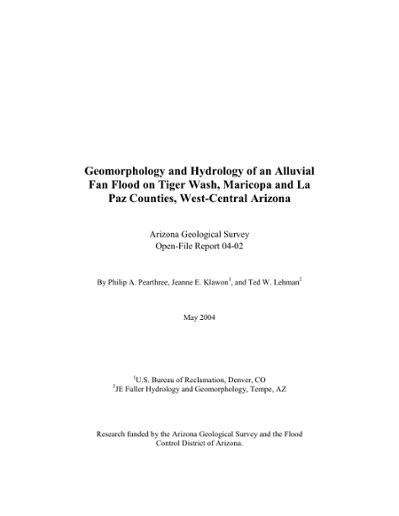 Management of flood hazards on alluvial piedmonts in the southwestern United States is increasingly important because urban development is rapidly expanding into these areas. Flows are very infrequent in most desert fluvial systems, yet these events can be extreme because watersheds generate large amounts of runoff per unit area during intense precipitation events associated with convective thunderstorms or incursions of dissipating tropical storms. Distributary (downstream-branching) fluvial systems that are common on desert piedmonts present special challenges because of uncertainties about flow distribution during floods. Portions of many distributary channel networks are incised into Pleistocene surficial deposits. In these areas, channel positions are relatively stable and inundation in floods is limited in extent. In active alluvial fan areas, however, topographic relief associated with channels is minimal and areas between channels are covered with Holocene deposits indicative of fairly recent fluvial activity (Pearthree, 1989; Baker and others, 1990; Pearthree and others, 1992; Field and Pearthree; 1997). These latter systems are of particular concern for floodplain management because of complex flow patterns, local high velocity flow, widespread sheet flooding and the potential for changes in channel position during large floods (NRC, 1996). Hydrologic and hydraulic models commonly used to delineate floodplain areas are not adequate in the complex distributary environment, and newer, more sophisticated 2-dimensional flow models require validation against real flood flows (Pelletier et al., in review). Flood inundation on active alluvial fans has rarely been documented in detail (Vincent, 2000), however, in part because of the complexity of flow and in part because of the requirement that the flood be recognized soon after its occurrence in order to document the details of flow.