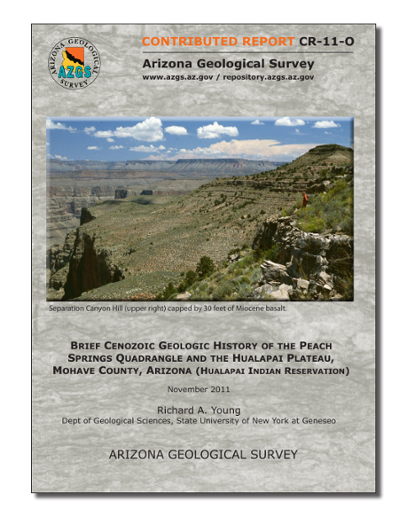 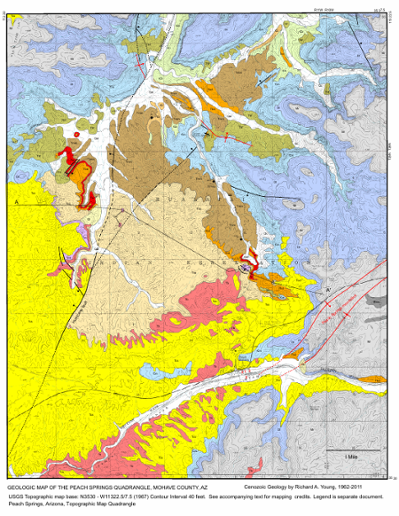 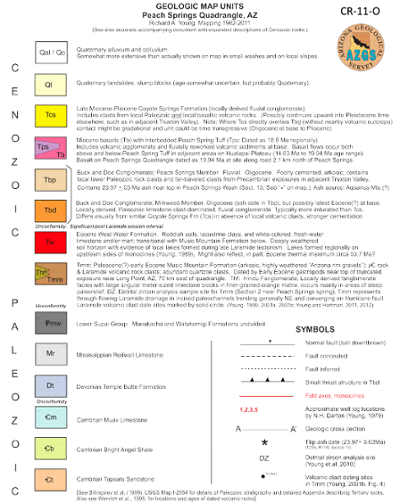 The Hualapai Plateau contains one of the longest (Paleocene to Pliocene), best preserved, and well exposed sections of Cenozoic geology in Arizona. The Cenozoic sediments and volcanic rocks are preserved in Laramide-age northeast-trending paleocanyons, which converge on the Hurricane fault zone. Adequately dating the full range of Cenozoic terrestrial sediments preserved in these paleocanyons is a frustratingly slow process, due to the relative scarcity of fossil remains and volcanic ash horizons. Milkweed, Hindu and Peach Springs Canyons (re-excavated paleocanyons) on the Hualapai Plateau preserve the best record of the Cenozoic history, in addition to descriptive logs from deep wells located close to the thalwegs of the paleochannels near Truxton and Peach Springs Arizona (Young, 1979, 1987, 1989; Young and Spamer, 2001, Elston and Young, 1991; Peach Springs Quadrangle, geologic map, 2011). Figures 1a and 1b are general location maps illustrating important geologic features. Early Eocene, late Oligocene, and early to middle Miocene ages have been established from scarce fossils (Long Point, AZ) and locally occurring basalt flows and volcanic ash. The Peach Spring Tuff (revised terminology, Young, 1999) is a widespread key Miocene volcanic ash flow (18.5 Ma) that extends from Barstow, California, approximately 210 miles (345 km) eastward to the Mohave-Yavapai County line along Interstate Route I-40 in Arizona, and from near the latitude of Hoover Dam in the north southward to the vicinity of Parker Dam on the Colorado River (Figures 20, 21). Its source is reportedly the Silver Creek caldera at the western edge of the Black Mountains near Secret Pass Canyon (Pearthree et al., 2009). The Peach Spring Tuff, interbedded with the Tertiary sediments and basalts found in and near Milkweed, Hindu and Peach Springs Canyons on the Hualapai Plateau, provided the earliest means of determining the relative ages and continuity of stratigraphic units across the region from the western Grand Canyon southward to the Aquarius and Mohon Mountains near Trout Creek (Figures 11, 20, 21). The tuff also preserves useful information pertaining to the nature and relative age of the Basin and Range episode of structural deformation along the Plateau margin.