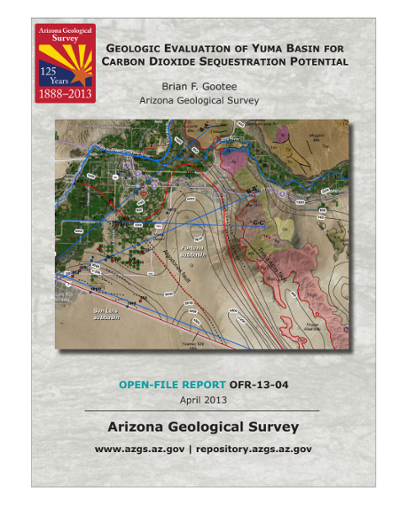 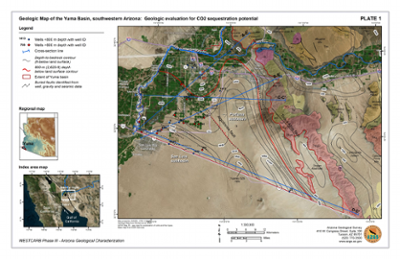 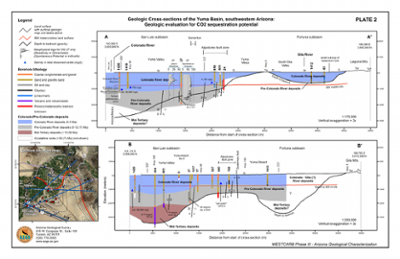 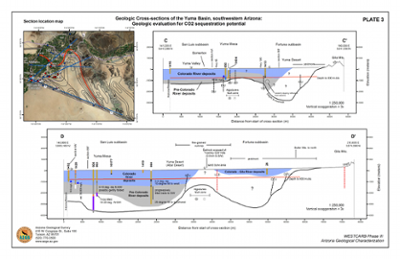 The Yuma basin is located in the southwestern Basin and Range Province of Arizona adjacent to the San Andreas Transform boundary and the Gulf of California. The Colorado River marks the western boundary of the Yuma basin for the purposes of this study, although it has no subsurface significance (Plate 1). Similarly, the Arizona-Sonora border marks the southern boundary of the Yuma basin for the purposes of this study, but also has no subsurface significance. The southwestern part of the Yuma basin is, geologically, part of the Salton Trough (Plate 1). Along the flanks of the basin are the northwest-trending Chocolate Mountains in California to the northwest, Laguna and Gila Mountains to the north and northeast, and Tinajas Atlas Mountains to the east and southeast. The Colorado and Gila rivers pass through the northern mountain ranges and converge in the Yuma Valley with the Colorado River continuing southward. . The Yuma Desert and Luke Air Force Range make up a large portion of the Yuma basin. The Yuma basin is separated into two subbasins by a northwest trending bedrock ridge that is buried in most places, forms several low hills, and connects the Cargo Muchacho Mountains in California with the Tinajas Atlas Mountains in northwestern Sonora. This ridge separates the Yuma basin into two subbasins, referred to as the San Luis subbasin in the southwest and the Fortuna subbasin in the northeast (Mattick and others, 1973). The Yuma basin as defined above is the second largest Cenozoic basin in Arizona, with an estimated volume of 2,497 km3 underlain by Cenozoic basin-fill sediments, 1,437 km3 of which lie below 800 m (2,625 ft) depth (Spencer, 2011). A maximum depth of approximately Arizona Geological Survey 2 3,795 m (12,450 ft) is modeled from gravity by Oppenheimer and Sumner (1981). Basin-fill sediments in the Yuma basin occupy an area of approximately 1,780 square kilometers (km2) (690 square miles (mi2)). Basin-fill sediments below a depth of 800 m occupy an area of approximately 1,130 km2 (435 mi2), or 63% of the Yuma basin.