An Evaluation of Carbon Dioxide Sequestration Potential in the Luke Basin, south-central Arizona 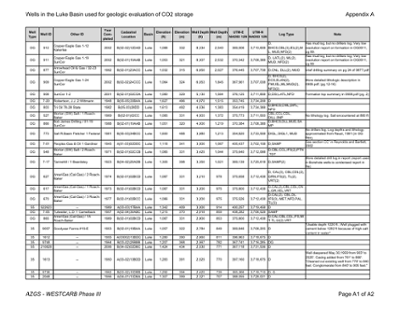 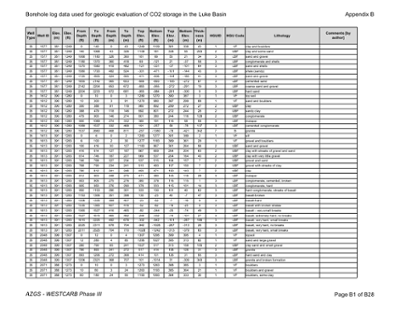 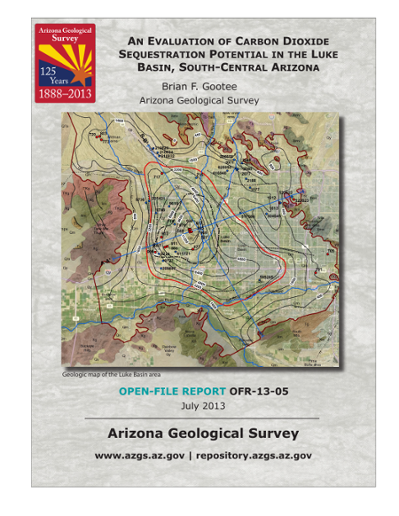 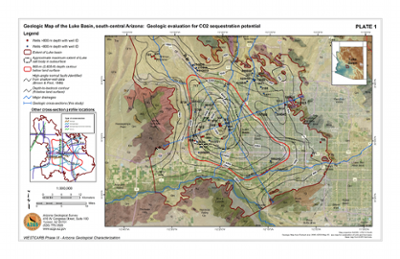 The Department of Energy (DOE), including its National Energy Technology Laboratory has established national programs to evaluate the technical feasibility of long-term subsurface geologic storage of carbon dioxide (CO2) produced by industrial activity. West Coast Regional Carbon Sequestration Partnership (WESTCARB) is a consortium of seven western U.S. States and one Canadian Province that is one of seven regional North American partnerships established to evaluate technical aspects of high-volume CO2 capture and sequestration. Collaborative WESTCARB research programs have included more than 90 public agencies, private companies, and non-profit organizations. The Arizona Geological Survey (AZGS) began work in 2010 on WESTCARB Phase III – Arizona Geological Characterization (California Energy Commission Agreement Number 500-10-024). As part of WESTCARB Phase III, AZGS is evaluating the potential for CO2 sequestration in geologic formations that are below a level of 800 meters (m) (2,625 feet (feet)) depth below land surface (bls). This evaluation is directed at porous and permeable geologic formations with impermeable sealing strata in Cenozoic sedimentary basins in the Basin and Range Province, and Paleozoic sedimentary formations in the Colorado Plateau. An initial screening of Cenozoic sedimentary basins with significant depth and volume below the 800 m bls level resulted in ten candidate basins from a total of 88 basins (Spencer, 2011). This report represents ongoing WESTCARB assessment of CO2 storage potential in the Luke basin, one of ten Cenozoic basins in Arizona identified during the preliminary evaluation, and is part of Tasks 2 and 3 of Arizona WESTCARB Phase III. Task 2 consists primarily of characterizing basin structure, stratigraphy, lithology, and the nature of seals or a cap rock. This task also includes determining the storage capacity of permeable sediments below 800 depth (Spencer, 2011). Task 3 is to determine if, and at what depth, saline groundwater approaches 10,000 milligrams per liter (mg/L) of total dissolved solids (TDS), characterized in a separate study (Gootee and others, 2012). This concentration represents the threshold above which water is considered non-potable and unsuitable as drinking water (United States Environmental Protection Agency). Individual-basin studies such as this study are intended to provide estimates of the volume of permeable strata that are capped by impermeable strata (with an interface at depths greater than 800 m), and that are saturated with saline groundwater (>10,000 mg/L TDS). Luke basin is a broad, northwest-trending Cenozoic basin in the south-central portion of the Basin and Range tectonic province. The White Tank, Estrella, and South Mountains border the west, south and southeast portions of the basin, respectively (Plate 1). The Hieroglyphic Mountains, Union Hills and Phoenix Mountains form the north and northeast boundary of the basin. Luke basin is drained by the Gila River on its southern margin, and includes segments of its major tributaries, the Salt, Agua Fria and New Rivers. Most of the Phoenix metropolitan area occupies the basin area, including major interstates I-10, I-17 and U.S. 60. Luke basin (Scarborough and Peirce, 1978) is also referred to as the West Salt River Valley subbasin, one of seven groundwater subbasins in the Phoenix Active Management Area (Reeter and Remick, 1986). Luke basin is estimated to be at least 3,600 m (12,000 feet) deep, with an estimated total sediment volume of 1,626 km3 (390 cubic miles (mi3)) (Spencer, 2011). Approximately 605 km3 (145 mi3) of basin-fill sediment is estimated to lie below a depth of 800 m (2,625 feet). Basin-fill sediments below a depth of 800 m occupy an area of approximately 680 km2 (263 mi2).